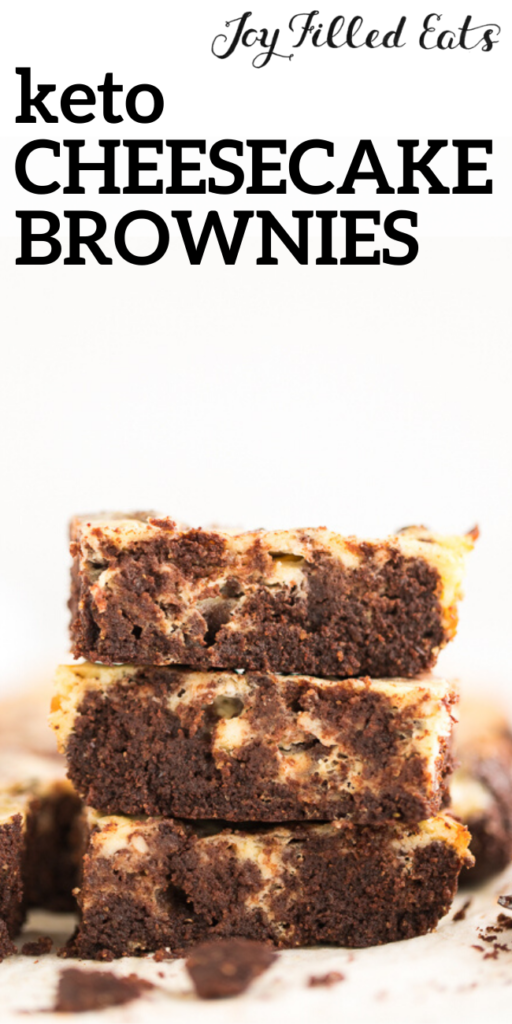 These Keto Cheesecake Brownies are dense and fudgy with a beautiful swirl. They are quick to make and have only 6 ingredients! This easy recipe is low carb, keto, gluten-free, grain-free, sugar-free, and Trim Healthy Mama friendly. 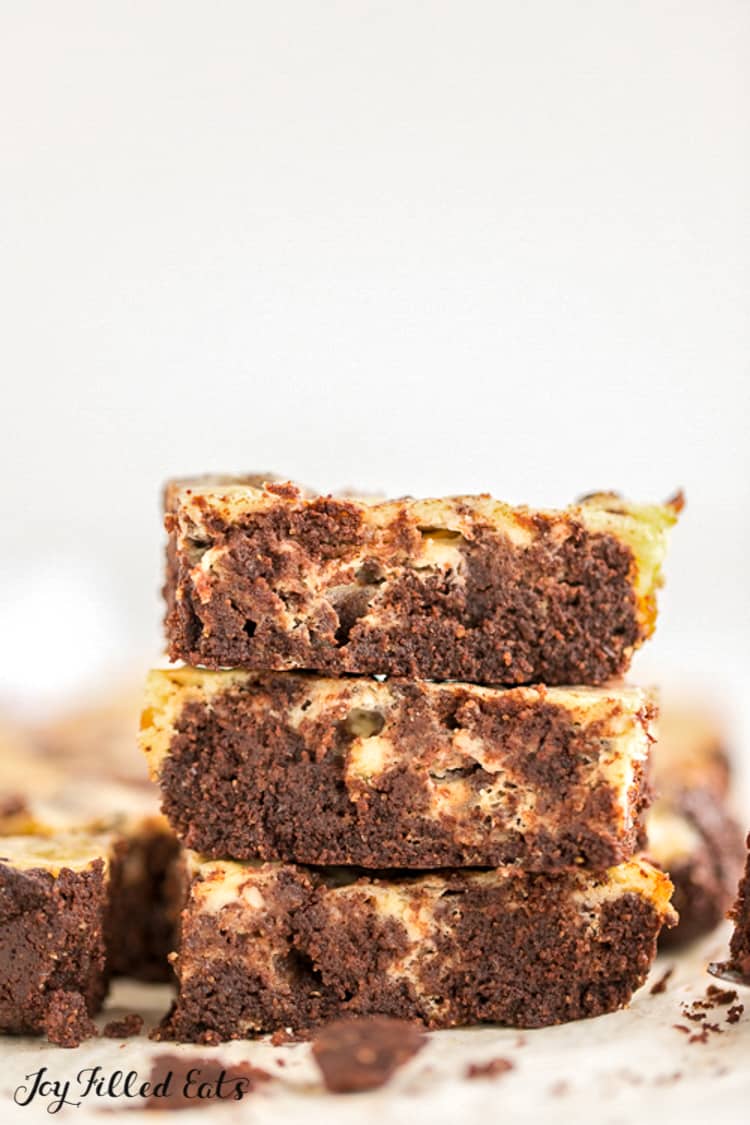 Brownies are one of my favorite things ever. Gooey homemade brownies are the hardest temptation to resist on any dessert table and I love them in all flavors and varieties.

When embarking on a low carb keto diet I knew I needed some chocolate to keep me on track so I made gluten free brownie after brownie until I reached chocolate perfection. These keto cheesecake brownies are totally fulfilling when on a low carb diet. 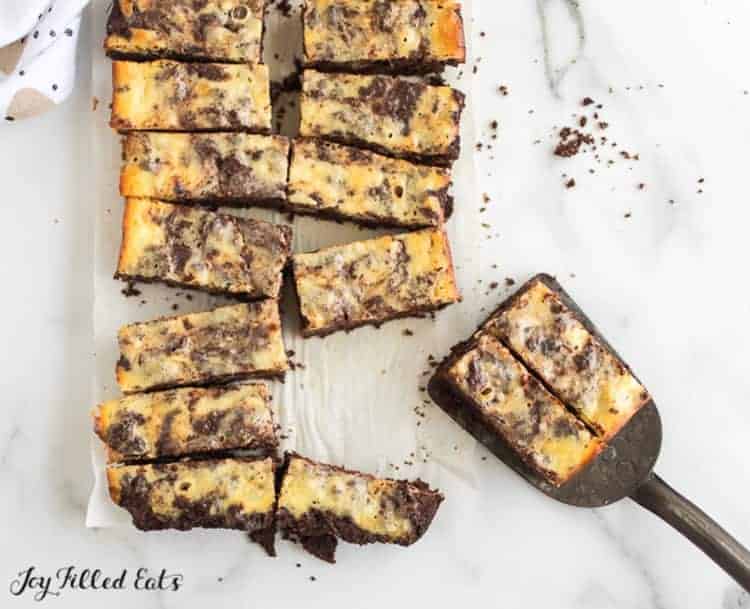 Almond Flour - I do prefer almond flour in baked goods. It has a mild flavor in low carb baking.

Unsweetened Baking Chocolate - Unsweetened baking chocolate is naturally low carb because it is only chocolate. It has 3g of fiber for 4g of carbs leaving only 1 net carb per serving. OR you can sub in sugar free chocolate chips but you may want to cut back a bit on the sugar free sweetener.

Sugar-Free Sweetener - I like to use a blend of xylitol, erythritol, and stevia in my recipes. By using a combination of sugar alcohols and stevia in the keto cheesecake brownies you can use half the amount required of regular sugar and 1:1 sweeteners.

And then you just need Butter, Eggs, and Cream Cheese! If you are using baking blend these have 6 ingredients. If you sub in almond and coconut flour they have just 7. 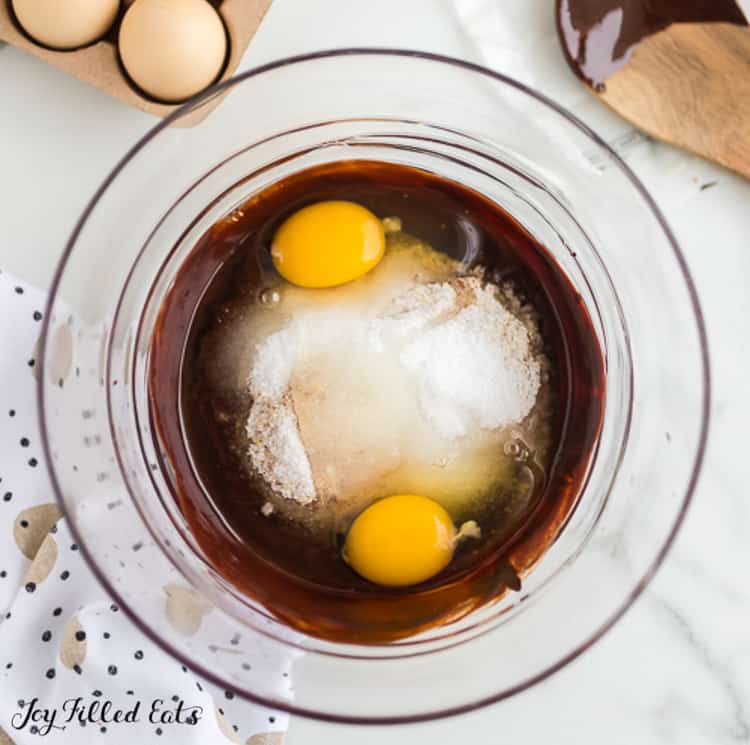 How to Make Keto Cheesecake Brownies

It is easy to make keto cream cheese brownies.

Step One: Just make the brownie batter by stirring together all the ingredients. A bowl and a wooden spoon are fine for this. You don't need a stand mixer or a hand mixer. Then, spread the batter in the pan. 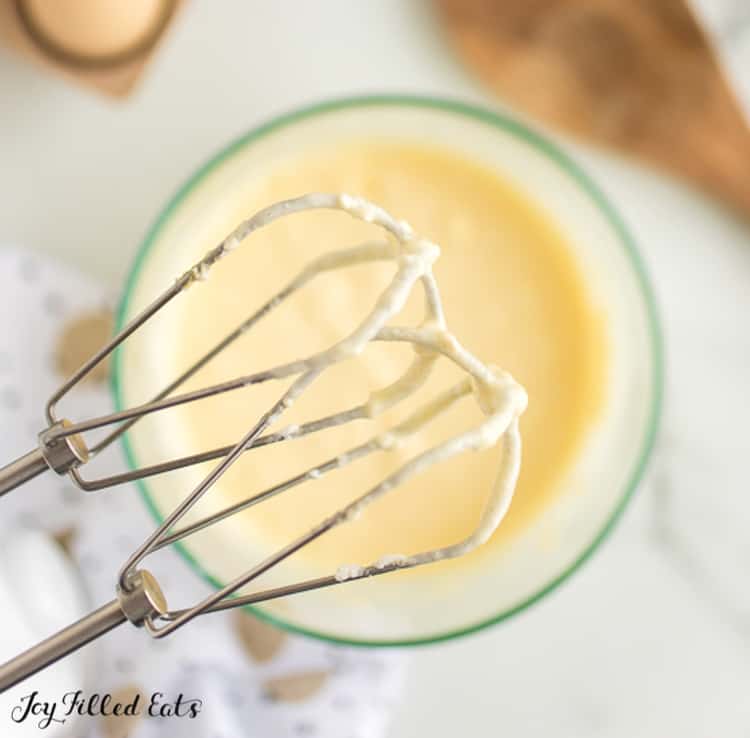 Step Two: Then make the cheesecake batter by beating the cream cheese, egg, and sweetener. 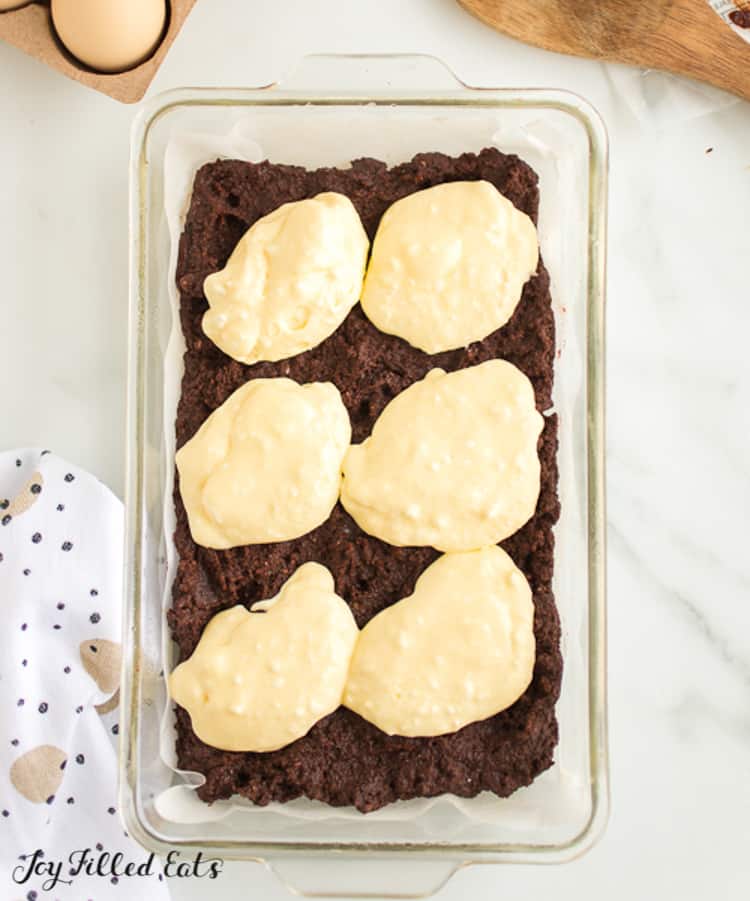 Step Four: Bake the low carb cheesecake brownies and you get the best of both worlds. Creamy cheesecake and fudgy brownies. 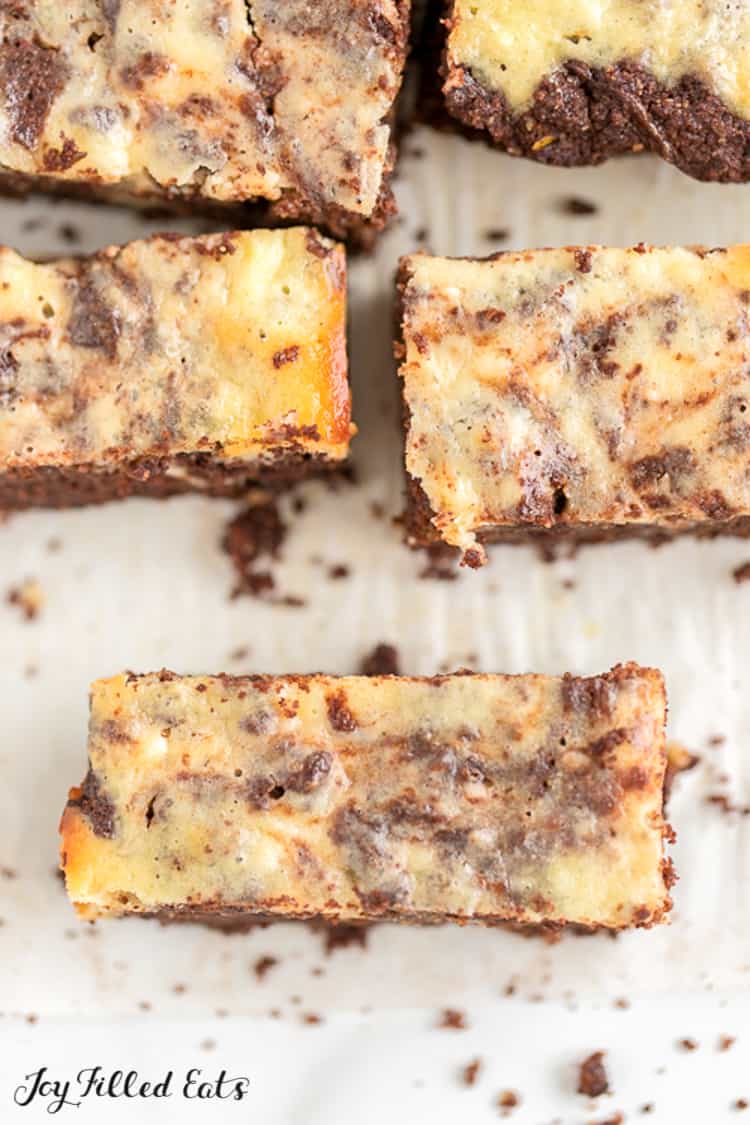 Why do you use Melted Chocolate in Brownies?

Most of my brownies start with melted unsweetened chocolate. You can make brownies with cocoa powder (like these low carb brownies) but I've found that low carb recipes which use melted chocolate for brownies are fudgier and I'm a fudgy brownie girl.

Yup. It's possible. If you are baking for a small group and have leftover keto cheesecake brownies my favorite thing to do with them is to turn them into truffles!

Leftover brownies make THE best brownie balls, cake balls, chocolate truffles, what you want to call them they are divine. Here is how to make Brownie Cake Balls.

Go ahead and double the part of the recipe! You may need to increase the cooking time by a couple of minutes but it's worth it for extra cheesecake. Want even more chocolate? Turn these into the ultimate keto chocolate cheesecake brownie by adding a handful of chocolate chips or chocolate chunks on top of the cheesecake filling. 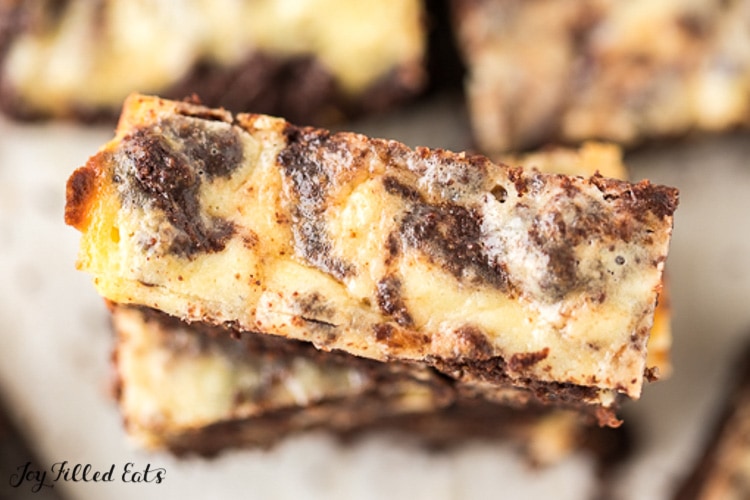 I now have over a dozen gluten free keto recipes for different types of sugar free brownies here are Joy Filled Eats:

And a Keto Brownie Cheesecake and Keto Chocolate Chip Cheesecake Bars for good measure! This has a brownie batter crust, a chocolate filling, and then a ganache topping.

Quite the assortment right? This gluten free Cheesecake Brownies recipe was one of the first brownie recipes I ever posted and one of the best! But they were desperate for new photos and come better instructions so here they are at the top of the list again. 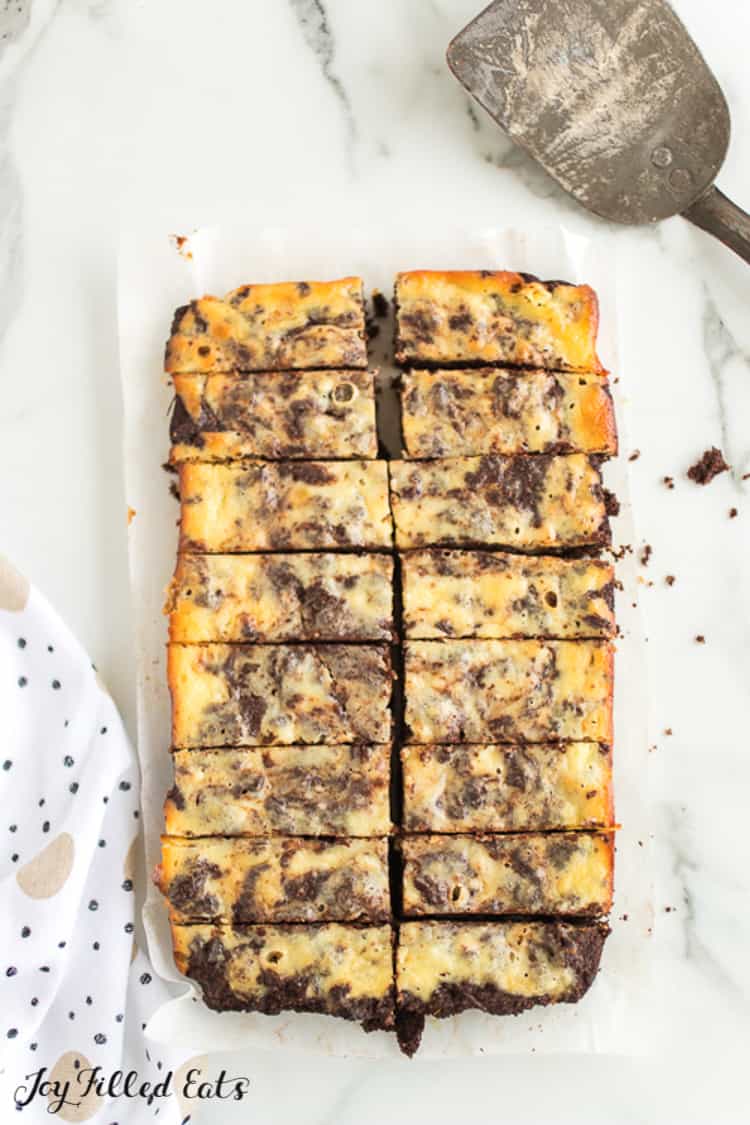 Nutrition: This recipe makes 16 brownies. Each brownie has 2 NET carbs. Substitutes: You may sub ½ cup Trim Healthy Mama Baking Blend for the almond and coconut flours. Notes on Sweeteners:
I use my own blend of xylitol, erythritol, and stevia in my recipes. This is twice as sweet as sugar. It is comparable to Trim Healthy Mama Gentle Sweet and Truvia.
To sub in Swerve or Lakanto Monk Fruit use 1.5 times the amount of sweetener called for.
To sub in Pyure or Trim Healthy Mama Super Sweet use half the amount of sweetener called for.
Substitutions will work in most recipes. They may not work in candies, such as caramel.