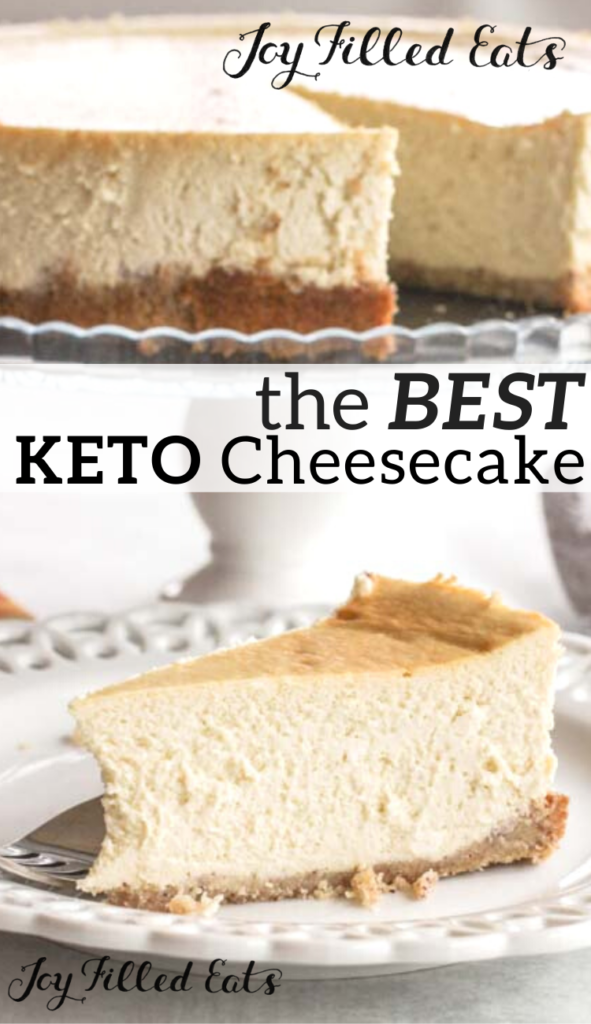 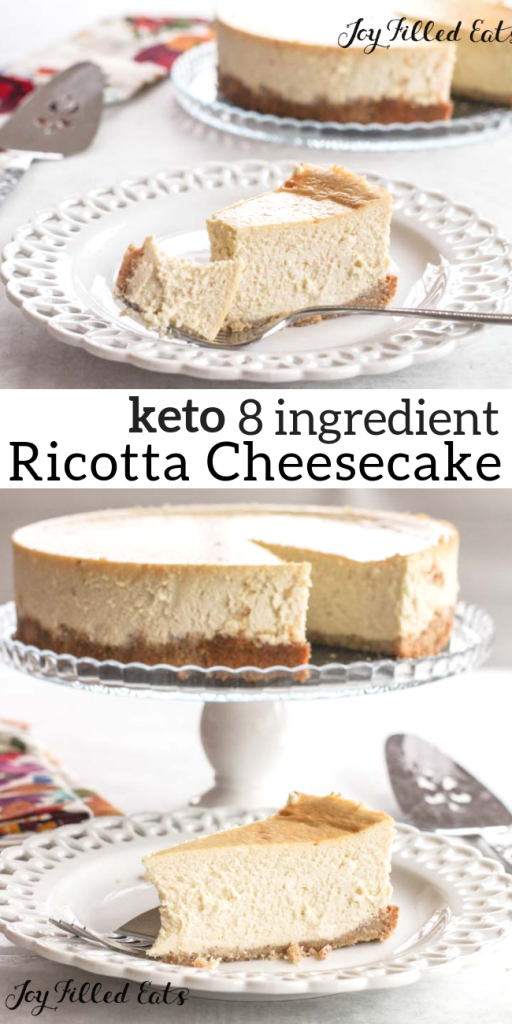 This Vanilla Ricotta Cheesecake Recipe is rich and creamy. If you’ve never tried ricotta in a cheesecake it works really well. It makes a lighter cheesecake than just using cream cheese. With just 8 simple ingredients I'm sure this will be your new favorite keto cheesecake! 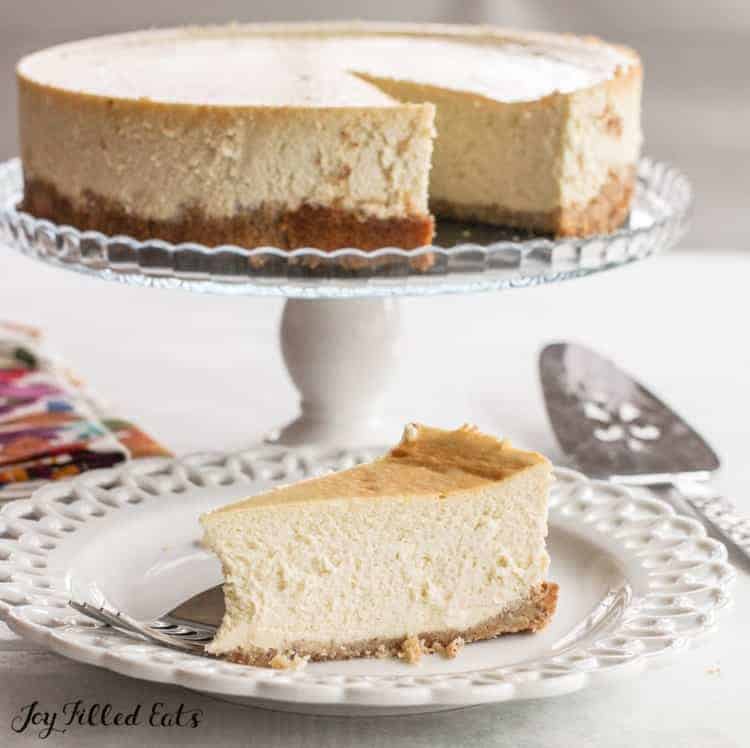 Almost every year my husband and I host a cheese tasting party for our friends. It is one of my favorite nights of the year. We provide wine, crackers, fruits, and dessert and each couple brings an interesting variety of cheese. We also do a white elephant gift exchange with humorous gifts. What is the best type of dessert for a cheese party? Cheesecake, of course. So I decided to stick with the theme and make a ricotta cheesecake for dessert.

From the very first time I made this, it has been our go-to dessert for nice occasions. 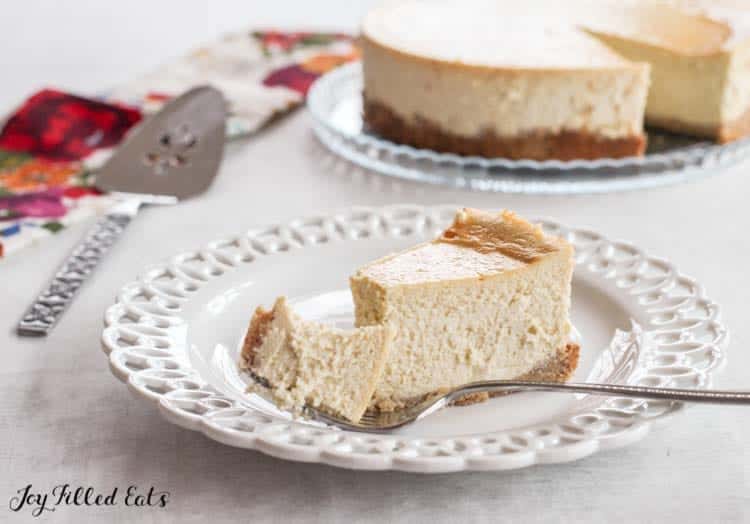 When presented with multiple cheesecake flavors I tend to stick to the classics. Vanilla. Lemon. Maybe Raspberry. Plain old New York Style Cheesecake topped with fresh strawberries. I don’t often go for chocolate, caramel, peanut butter, or other intense flavors when eating cheesecake. I love all of those but like my cheesecake simple most of the time.

The vanilla flavor is the star in this cheesecake. It is perfect on its own or topped with a top of whipped cream and the fresh berries of your choice.

How to make the ricotta cheesecake crust:

I make a very simple almond flour crust for this ricotta cheesecake in my food processor. It only takes a minute or two to pulse the ingredients and then press them into the bottom of a springform pan. 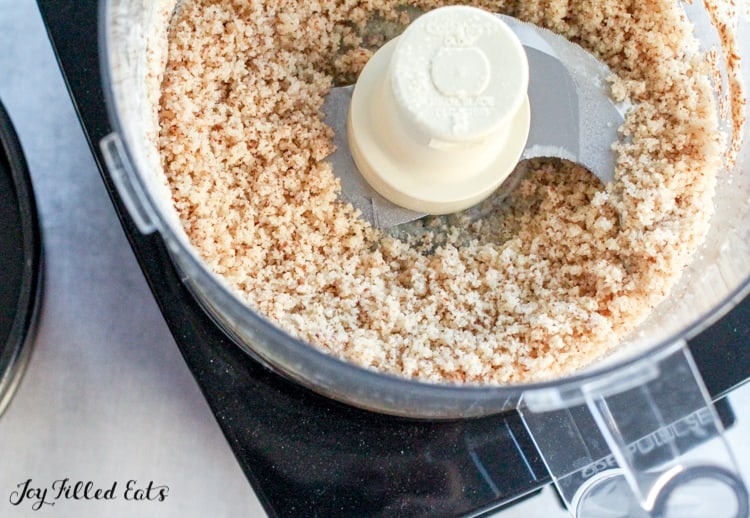 Once you press the crust into the bottom of a standard nine inch springform pan you bake it until it is golden while you make the cheesecake filling. Prebaking the crust brings out the flavor from the almond flour and gives it a nice golden hue. It also helps prevent the crust from getting soggy from the ricotta filling. 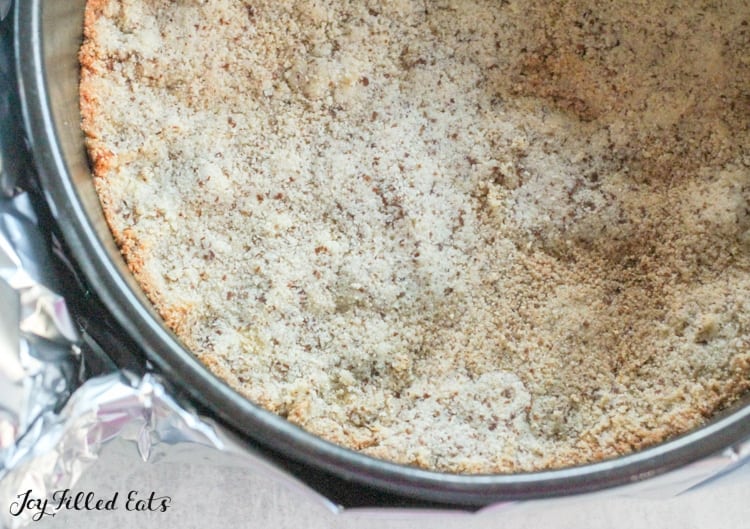 Using whole milk ricotta in cheesecake gives the cheesecake a lighter texture than a dense New York cheesecake and has a mild enough flavor you can add in any flavor of your choice. I think it is as close to an authentic Italian recipe for cheesecake as you can get while converting to keto. 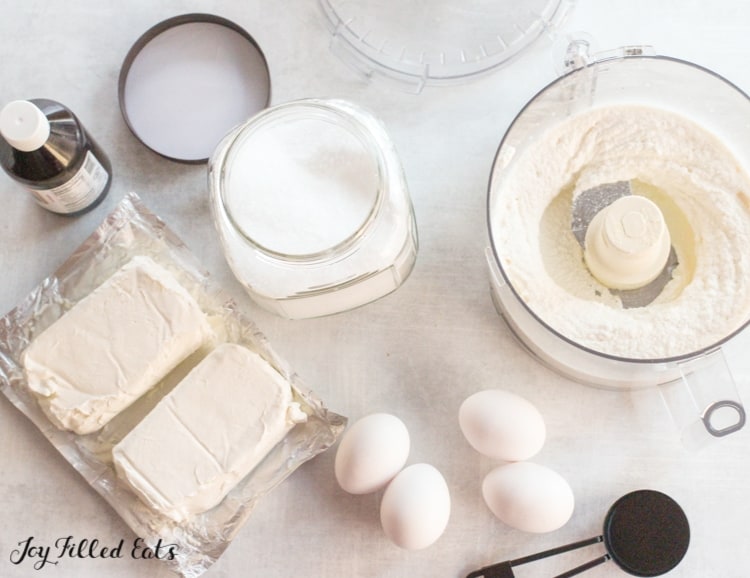 Step One: Once you've got the crust in the oven it is time to make the filling. Simply process the room temperature filling ingredients in the same food processor bowl. I don't even bother to wash it in between. 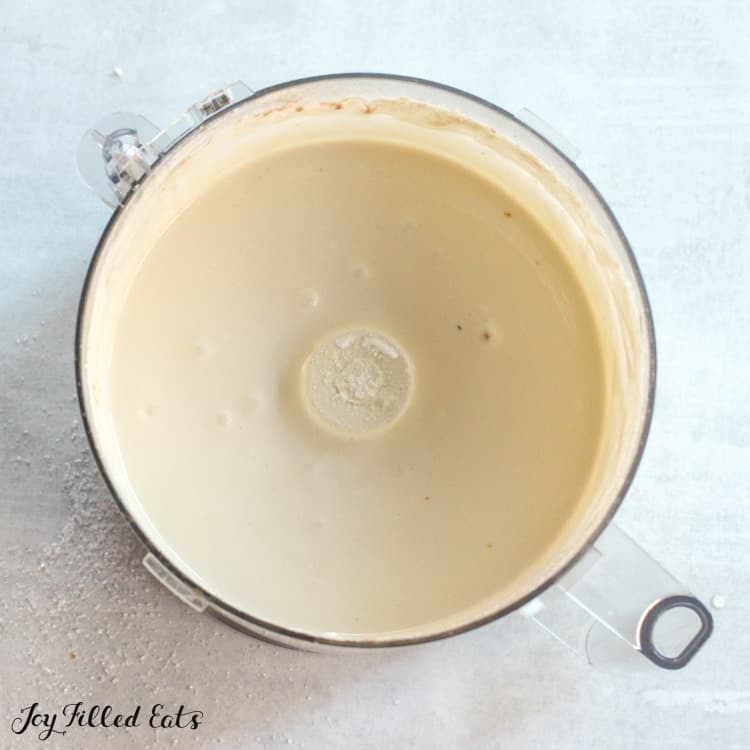 Step Two: Pour the filling over the par-baked crust. Bake the cheesecake in a water bath (just a larger roasting pan with an inch or two of boiling water) until it no longer jiggles in the center when lightly shaken. Cool completely and then chill in the fridge for a few hours. 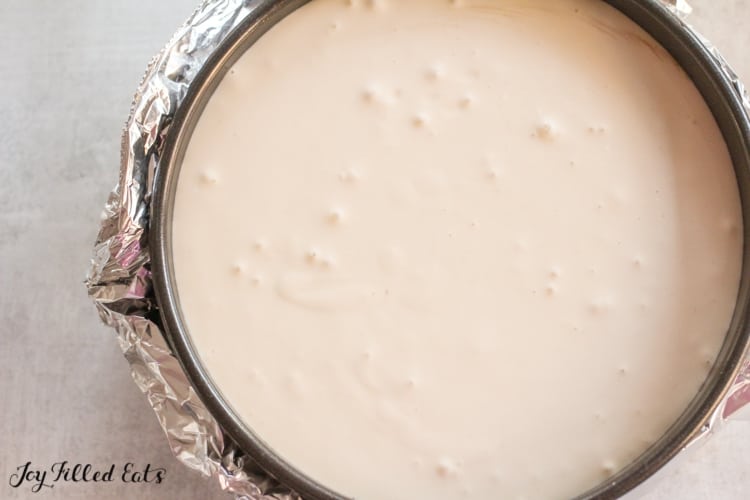 I used vanilla extract in this ricotta cheesecake so the flavors of the ricotta and cream cheese would really stand out. You can sub in a little lemon juice, lemon zest, or lemon extract, orange zest, or almond extract instead.

Another idea would be to swirl in a berry puree before baking. I love the beautiful colors of cranberry cheesecake bars or my raspberry cheesecake brownies. Looking for a no-bake recipe? Try my Keto Blackberry Cheesecake!

My top kitchen appliance is a food processor. You see my Cuisinart food processor in almost every recipe I have. If you are only going to buy one appliance to prep with this should be it. I recently upgraded to the 14 cup model and it is like a dream come true. I gave my ten year old smaller food processor to a friend because it is still going strong.

When you make cheesecake in the food processor it saves on time because you can make the crust and then the filling without even washing it. True story. I don't even bother to wash the bowl between steps. A couple of bits of almond flour crust in the cheesecake batter doesn't matter in the slightest. I just scrape out the sides with a rubber spatula and let the crumbs remain.

This method makes any of the cheese cake recipes you want to try SO much easier! 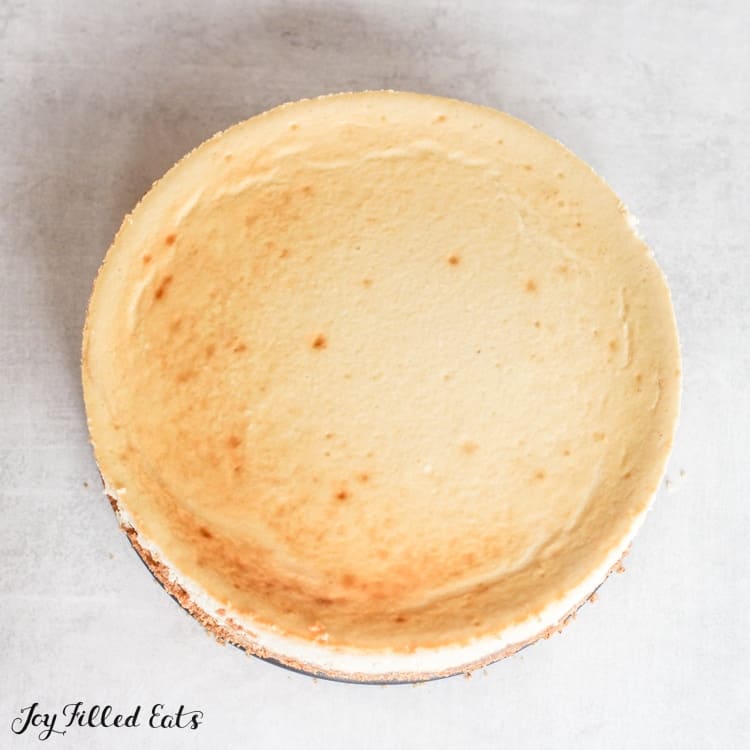 What is a Bain Marie? Do I need a water bath for a cheesecake?

The term Bain-marie means "A container holding hot water into which a pan is placed for slow cooking". The reason why a water bath works so well for cheesecake is that it helps the cheesecake heat up and then cool down gradually. This ensures a creamy texture and helps prevent cracking.

I don't always use a water bath. And I'm not always patient enough (or have enough time) to let my cheesecake cool gradually. So sometimes my cheesecakes crack. When that happens I simply top them with berries or whipped cream and no one is any wiser. Check out my beautiful cracked easy pumpkin cheesecake. Still delicious!

What if I don't have a springform pan?

You can make any cheesecake into cheesecake bars. For this one, I would make 1.5 times the crust and then bake it in a 9 x 13 pan. It will take between 35-45 minutes to bake. Maybe a little longer. Just bake it until the center only jiggles slightly when gently shaken.

Tips for a Perfect Ricotta Cheesecake 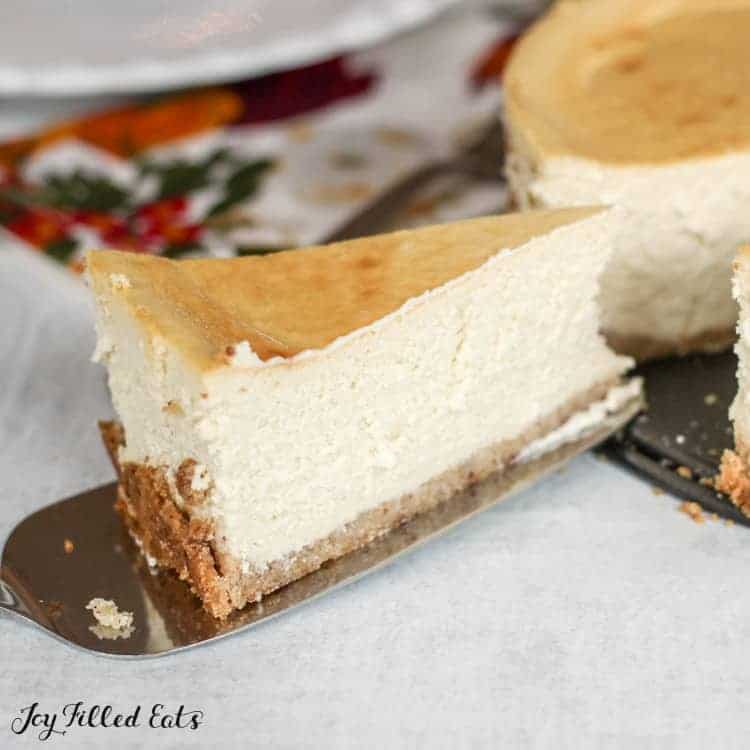 I hope you love this Ricotta Cheesecake! 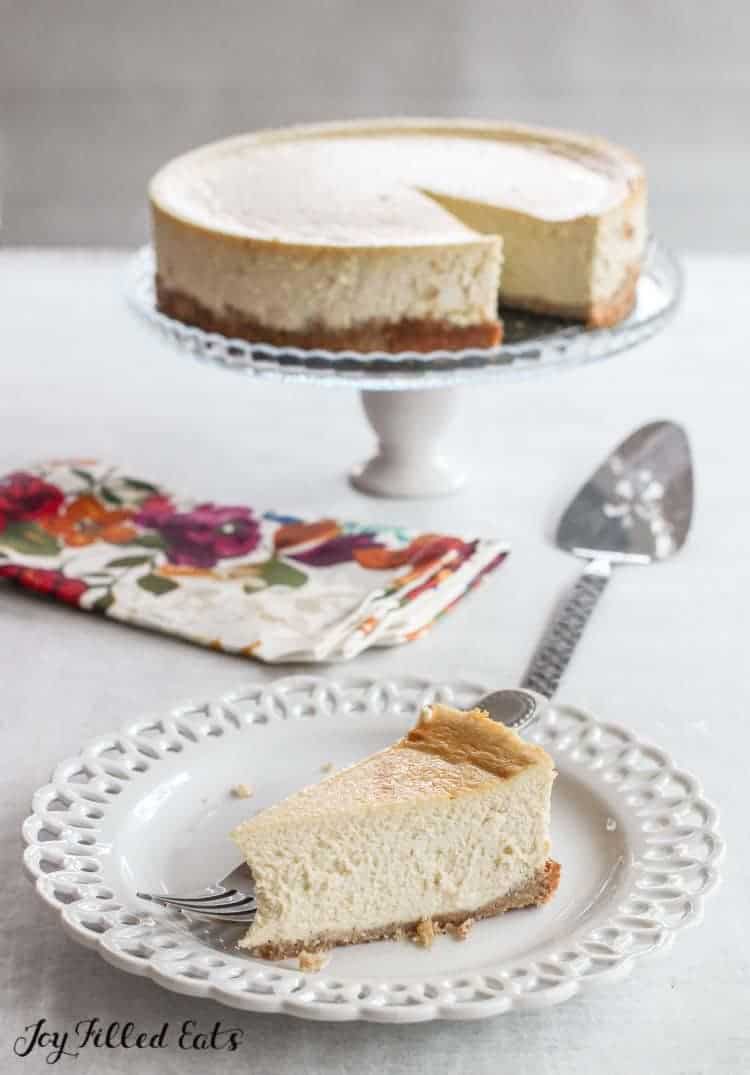