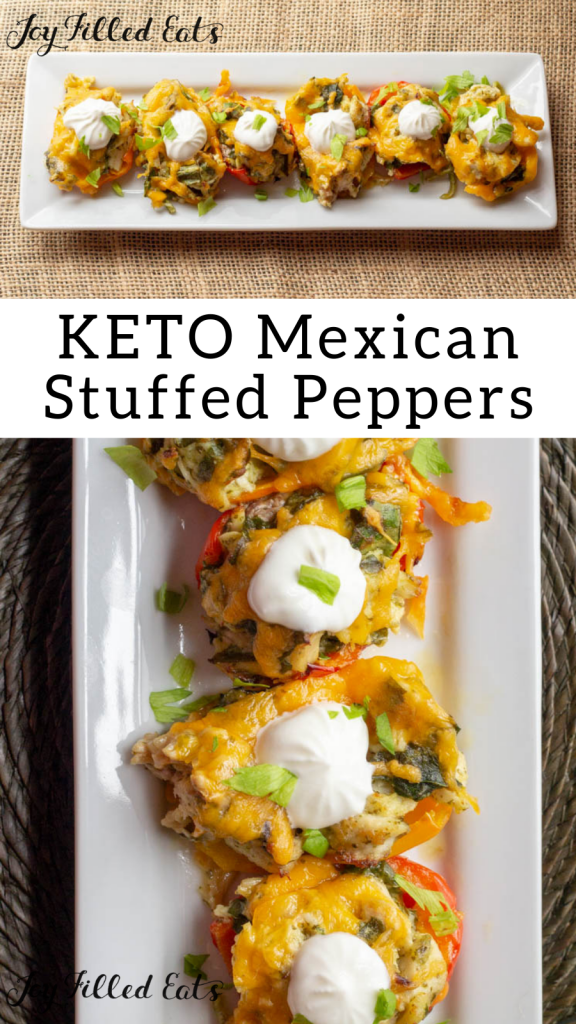 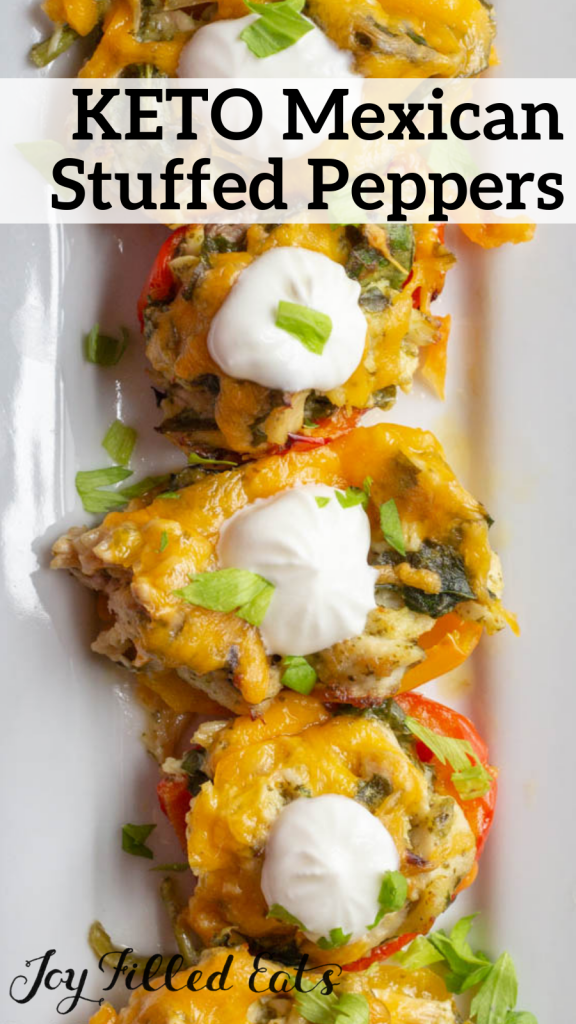 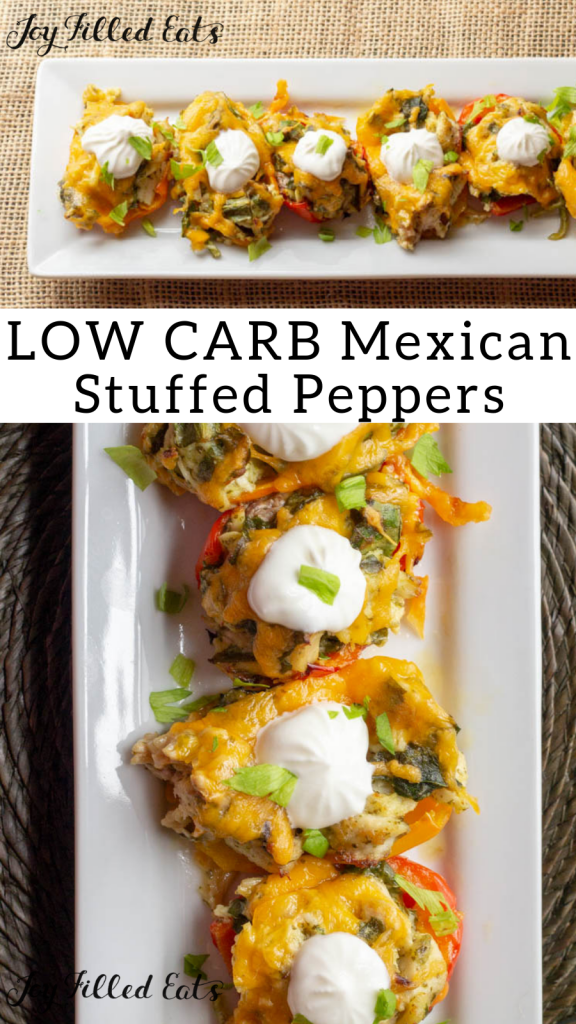 Chicken stuffed peppers is a quick meal for those busy workdays. Sweet mini peppers that are stuffed with chicken, cilantro pesto, spinach, cheese, and more baked to a tender and tasty dinner. Low Carb Mexican stuffed peppers are a delicious way to use up peppers from your garden or farmer's market.

I love Mexican food. If I had to pick one ethnic food to eat for the rest of my life, Mexican would be among the top contenders. I also love Thai and Greek food, so it would be a very hard decision.

My garden this spring magically grew a huge cilantro plant. I’m calling it magic since I didn’t plant any seeds and they are supposed to be an annual. What I did do was kill a small cilantro plant last summer. As it was dying it must’ve dropped seeds because this year I was in cilantro heaven.

Unfortunately, that lovely plant went to seed already despite my efforts to stop it. I can only hope that next spring will be welcomed with another crop of cilantro.

But not before I was able to use my abundance of cilantro in some great recipes like these Chicken Stuffed Peppers. 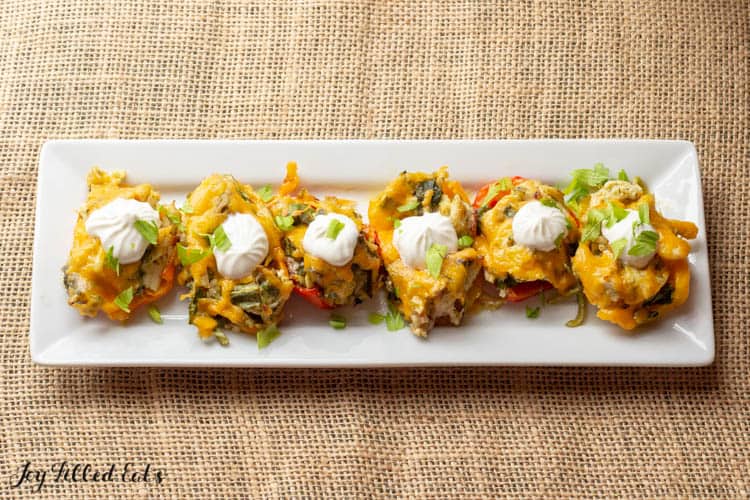 These mini chicken stuffed peppers are packed with good stuff. Chicken, cilantro, cheese, and spinach give them flavor and nutrients. They are perfect for an easy appetizer, party, or as a main course. 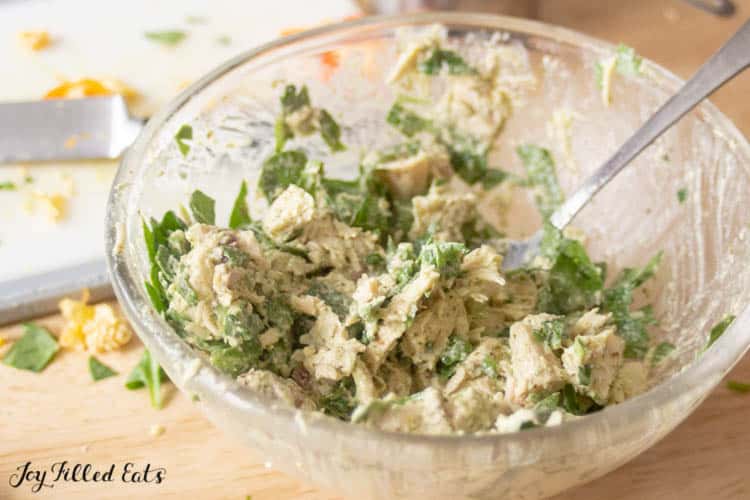 How To Make Mexican Stuffed Peppers

Start by preheating your oven, and then while it is heating work on the filler. In a bowl mix, your mayo, sour cream, pesto, and garlic salt together. Then slowly add in your chicken, spinach, and half of your cheese. Spoon the mixture into the split peppers and then top with remaining cheese. Toss in the oven, bake and then top with sour cream and chopped cilantro.

Can I Use Pre-Cooked Chicken For This Stuffed Peppers Recipe

Absolutely! I specifically use this recipe for using up leftover chicken. Whether you debone a rotisserie chicken or batch cook shredded chicken and toss in the freezer. Either way, this is a speedy dish to pull together when you have pre-cooked shredded chicken.

Now, if you don't have pre-cooked chicken on hand, just make up some chicken. Season with salt and pepper and then once cooked shred with two forks or a meat shredder.

To really kick these up a notch make them with the chicken from my Baked Chicken Fajitas. 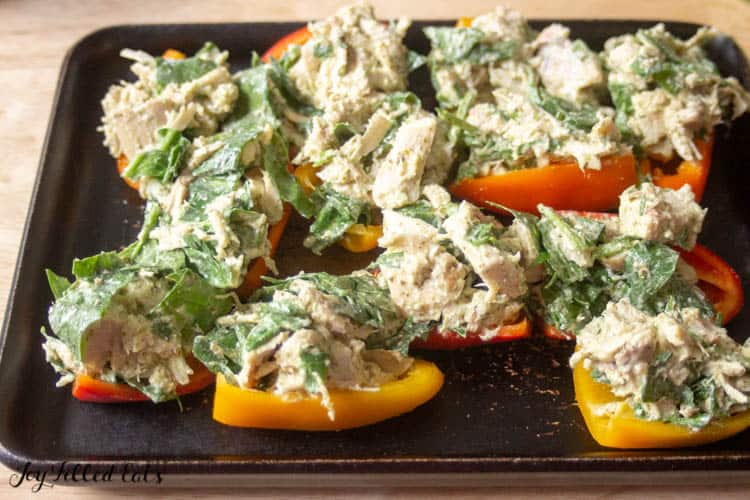 Can I Swap Cheddar Cheese With Mozzarella

Of course. You can use whatever cheese you prefer or have on hand. Whether it is sharp cheddar, mozzarella, pepper jack or even a Colby jack mix.

Can I Use Regular Bell Peppers for Chicken Stuffed Peppers

Yes. If you don't have your hands on sweet mini peppers, you can use bell peppers. I would just suggest cutting them into sections to mimic a mini, but you could also just split them in half. Any color of pepper works and the filling is versatile so it will pair nicely.

How To Make Stuffed Peppers Without Rice

You won't even miss the rice in this recipe! Tender chicken, a creamy base, spinach, cilantro pesto and topped with cheese. Top with a dollop of sour cream and extra cilantro and dig in.

I wanted to create a low carb stuffed pepper that didn't have empty carbs. With the creamy base and spinach, it creates filler, so you don't need rice.

What Is Cilantro Pesto

Cilantro Pesto is a recipe I made a while back, and I was shocked at how delicious it was. I gave it a try adding to my stuffed peppers, and I will NEVER look back. You can get the Cilantro Pesto recipe here. This pesto is great for this recipe, adding to pasta or zucchini noodles, or topping chicken for a quick dinner.

Sure. You could use ground beef, sausage, turkey, or even chorizo in replace. I love the chicken pairing, but it doesn't have to be chicken if that isn't what you have. Just make sure to thoroughly cook the meat before you prep the peppers to bake. 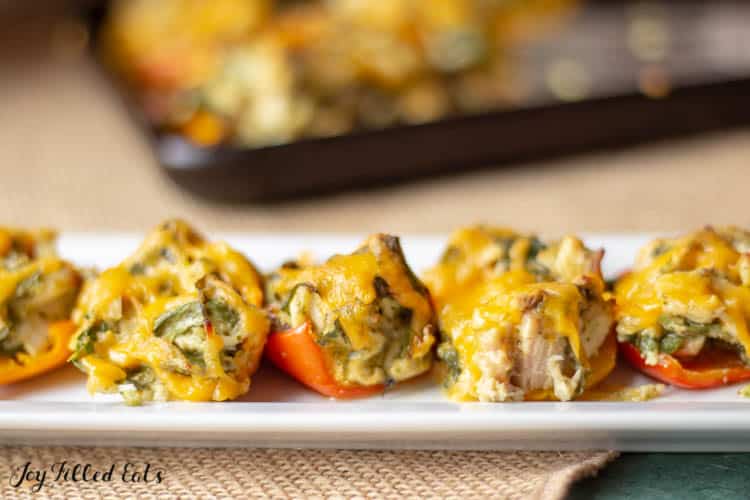 Can You Freeze Chicken Stuffed Peppers

You bet! You will want to flash freeze them on a sheet pan, and then once they are ready to transfer to an airtight container or freezer bag. If you want you can cook them straight from the freezer if so add additional time to the cooking to ensure they bake through.

I generally cover them and bake for around 20 minutes, then remove the aluminum foil and finish baking, so it browns up.

What To Serve With Mexican Stuffed Peppers

Eat these alone or pair with cauliflower rice, side of salsa, and cloud bread chips or whatever else sounds tasty. We generally eat these peppers alone or with the cauli-rice. But don't feel you have to do the same.

Love this recipe? Try these keto chicken enchiladas with homemade keto enchilada sauce next! Or my dairy-free Paleo Stuffed Peppers for a lighter main course. 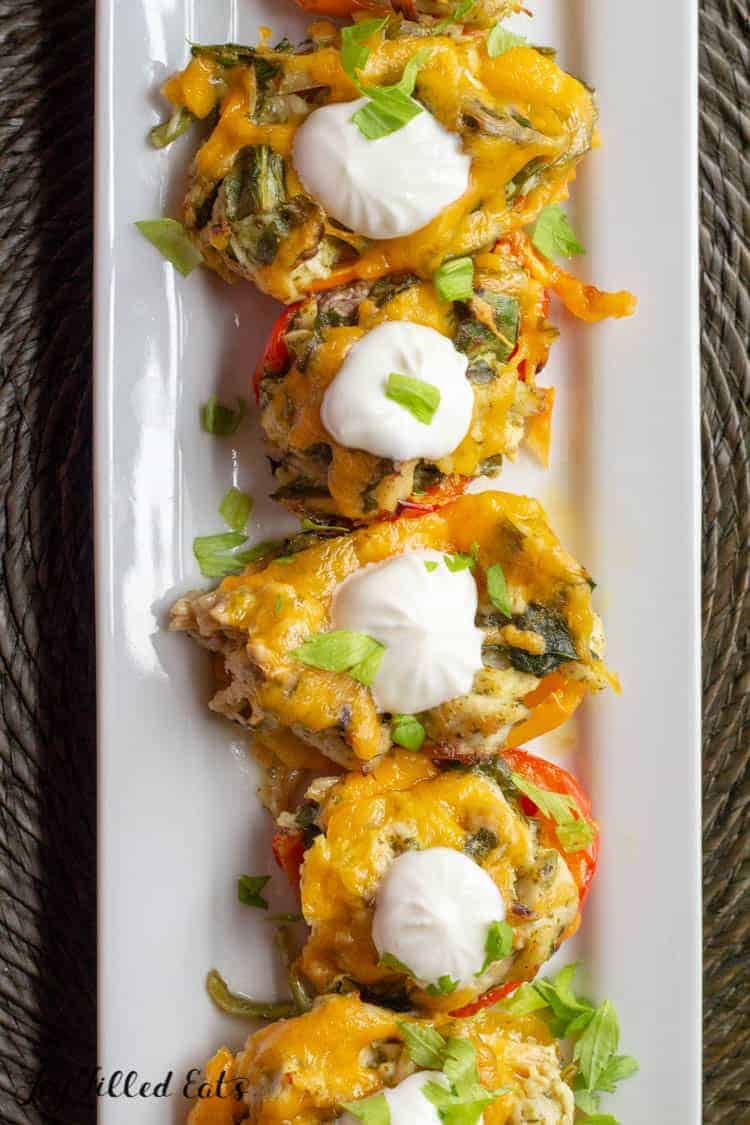