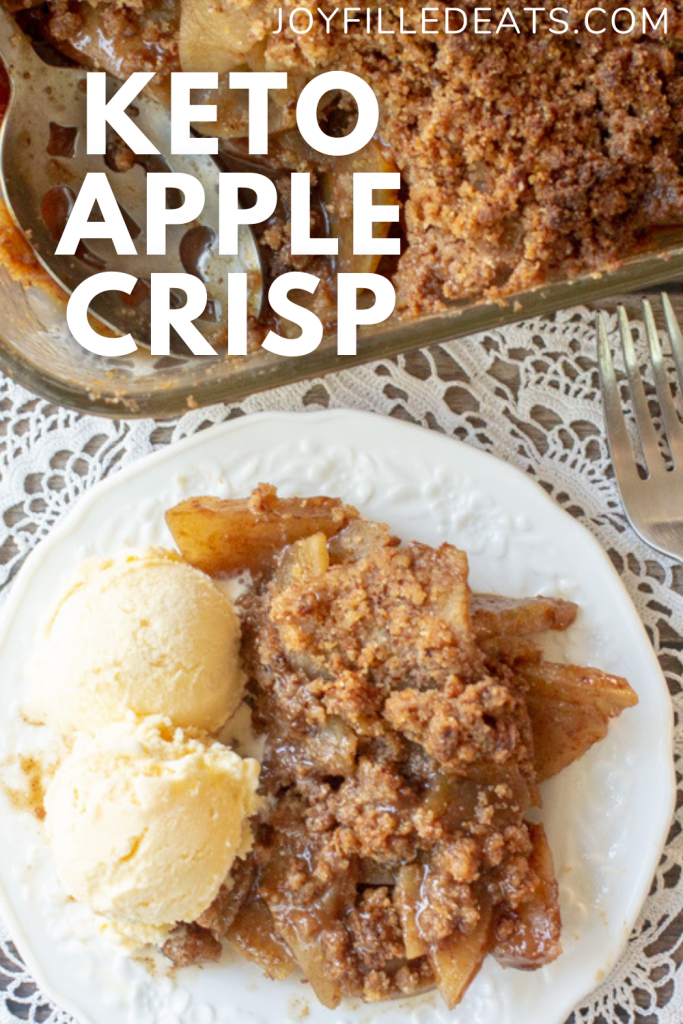 This Keto Apple Crisp is easy to make, has to perfect amount of fall spices, and is positively delicious. With my special ingredient, you can enjoy apple crisp and still keep it low carb! Only 5 net carbs per serving. This delightful dessert has just 6 ingredients and is also gluten-free, sugar-free, and grain-free. 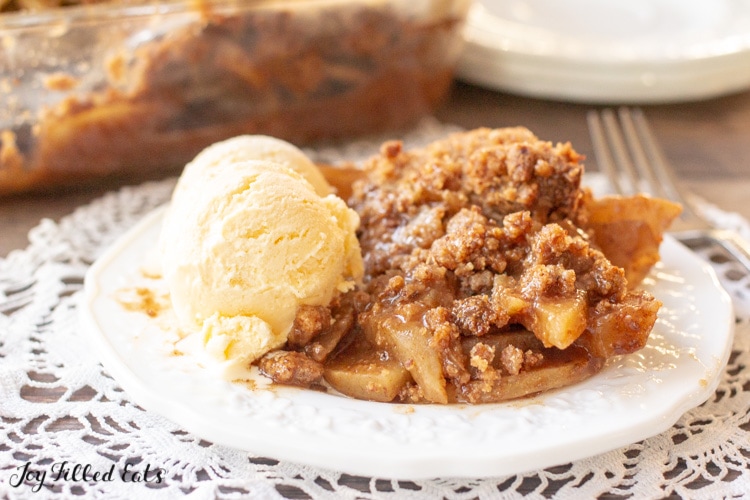 Before eating low carb, I remember the days of having a warm bowl of hot apple crisp with ice cream melting into the top of it. It’s one of the best desserts ever and as soon as apple picking season begins in September and October here in the Northeast I want some.

It was too hard to accept the idea that I would have to give up the flavor and texture of sweet and delicious apples. Rest assured, this low carb apple crisp doesn’t have a single apple, and you won’t even know the difference.

I'm not the type of person to use cutesy names that reference a faux apple crisp or mock apple so I decided to just go ahead and call this an apple crisp despite the lack of apples. It truly tastes like one!

Fall desserts are always a hit, and I know that many people rave over pumpkin everything. Don’t get me wrong, I do enjoy some mildly flavored pumpkin desserts too, but apples steal my heart. Thankfully, with this recipe for keto apple crisp, I can enjoy a dessert that is so similar to real apples without the carbs or guilt involved. 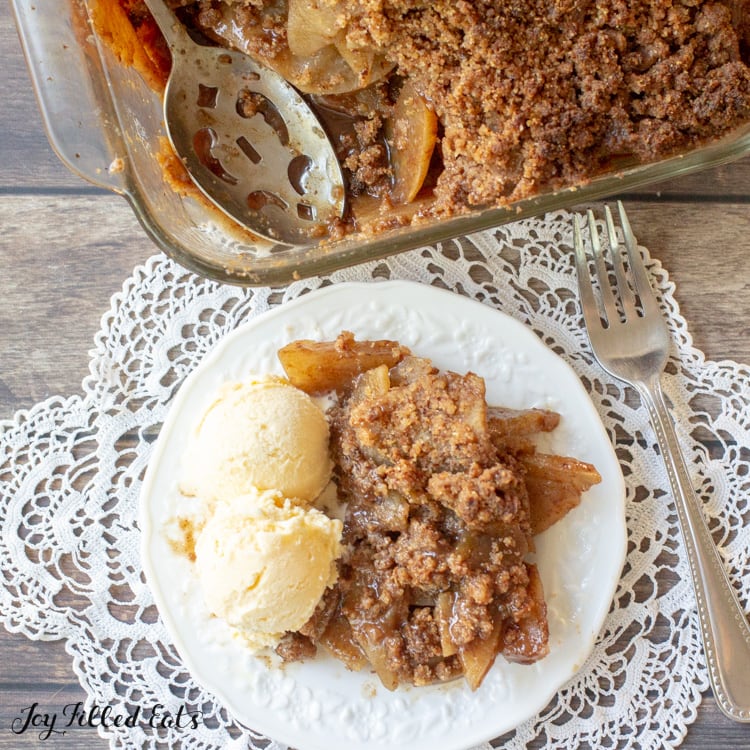 What You Will Need To Make Low Carb Apple Crisp

There is, of course, the sweet apple pie filling along with the cinnamon-scented crumble topping. This whole dish has just 6 or 7 ingredients. Here are the ingredients you will be needing:

Other options would be to add a squeeze of fresh lemon juice to balance the sweetness, some dried sugar-free cranberries, or chopped nuts into the crumble topping.

If you don't mind a few more carbs and are just looking for a sugar free gluten free apple crumble, be sure to try out my Apple Crisp with Oats, Pears, Cranberries, & Pumpkin.

Or go rogue and try my Keto Apple Cake that does indeed have real apples (and only 4 net carbs per serving!). 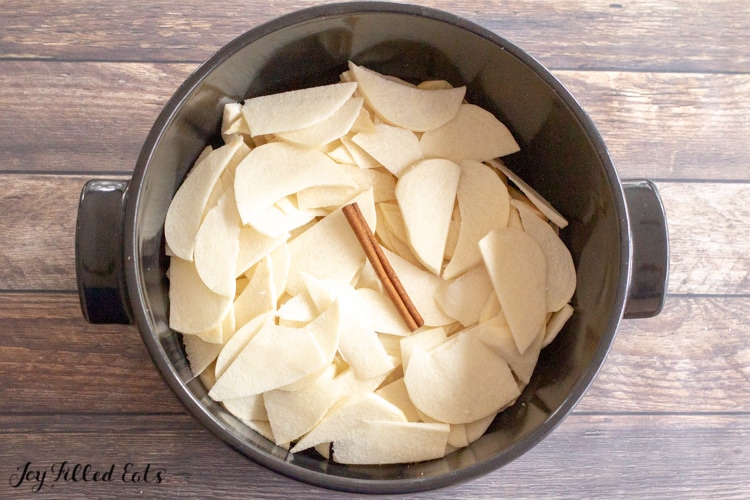 How To Make Keto Apple Crisp

Just the thought of smelling this apple crisp recipe cooking makes me drool! Here are the four steps needed to make this recipe.

Step 1: Begin by boiling the sliced jicama along with a cinnamon stick until it has softened. It usually takes around 1 ½ - 2 hours. Just keep tasting it. It won't have much flavor but don't worry about that. You are looking for a cooked apple type of texture. The photo below is of my jicama after 2 hours of boiling.

Alternative method to soften jicama: you can soften the jicama in the instant pot by cooking it on manual high pressure for 30 minutes and then letting the pressure release naturally. 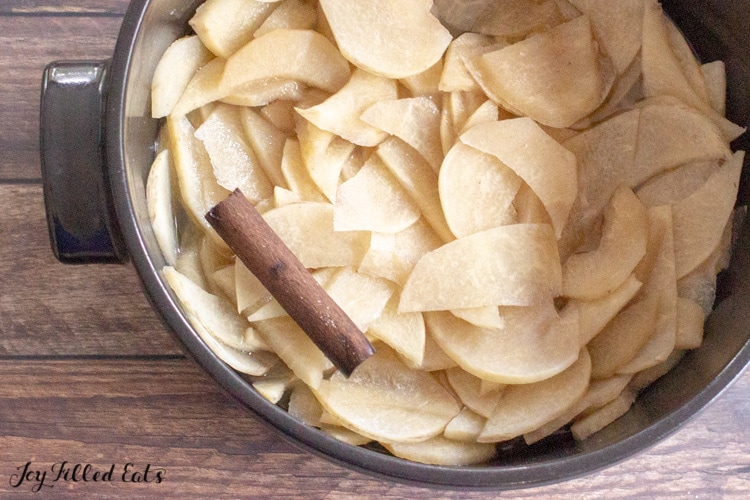 Don’t underboil the jicama! The jicama doesn’t lose its crunch while it bakes, only from boiling or cooking in a pressure cooker. This really is the most important step! It will take hours but it is worth it.

If you'd rather a crumble with chayote squash try this one. 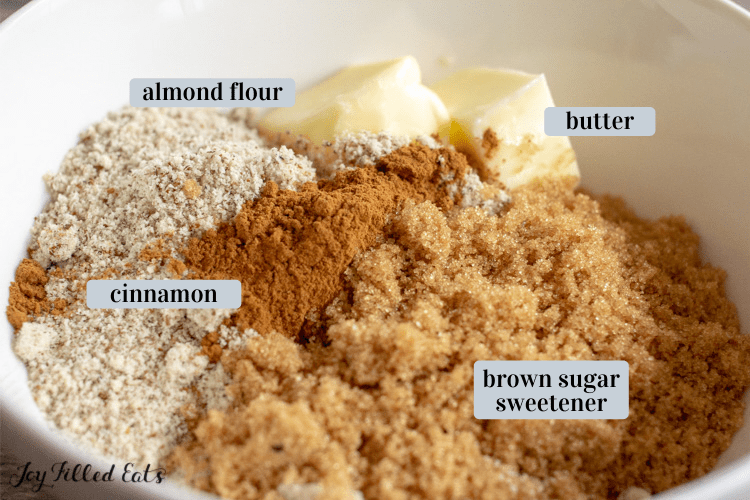 Step 2:  Use a fork or pastry cutter to cut the butter into the almond flour, cinnamon, and sweetener. Alternatively, you can process it in the food processor for a minute or two. 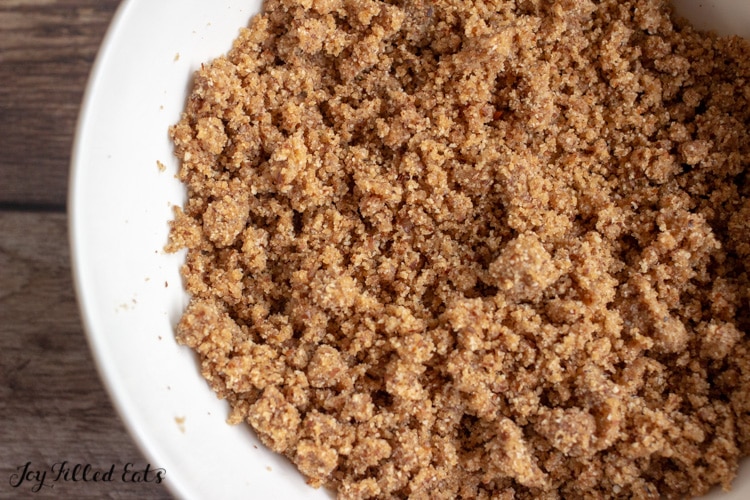 This is the crumb topping for your apple crisp. It is our favorite! I do also love a pecan crumb topping so feel free to try out some pecan meal in this instead of almond flour! 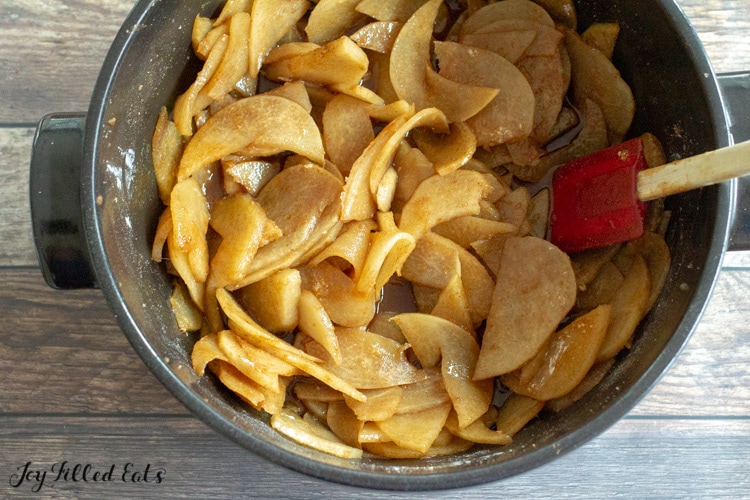 Step 3: Drain the water off the jicama and throw out the cinnamon stick. Add the sweeteners and cinnamon to the jicama. Sprinkle on the xanthan gum and combine well. 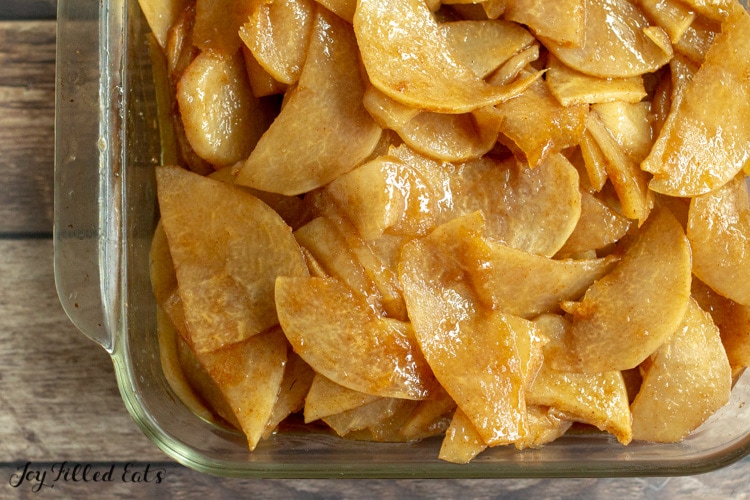 Place the mixture in an 8x8 baking pan then add the crumb topping. 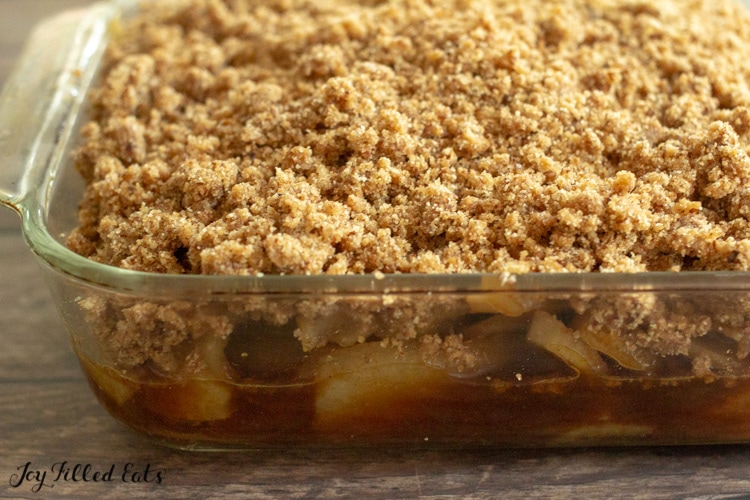 Step 4:  Bake the low carb apple crisp for 35-40 minutes or until the top is a beautiful golden brown. Allow it to cool for a few minutes, then serve with some keto ice cream like my Salted Caramel No Churn Ice Cream or my Low Carb Apple Pie Ice Cream. Sit back and enjoy it!

How To Pick A Good Jicama

If you’ve never boughten jicama before, it can be a little hard to know the best ones to get. You should be looking for smaller sized jicamas because they tend to cook faster than larger ones. Plus, small ones have a much sweeter flavor and that is exactly what we are going for in this low carb apple crisp recipe. Next, keep an eye out for one that is smooth and doesn’t have a bunch of cracks or bruises. Ideally, there shouldn’t be any spots that seem wet or soft because that is an indication they are going bad. 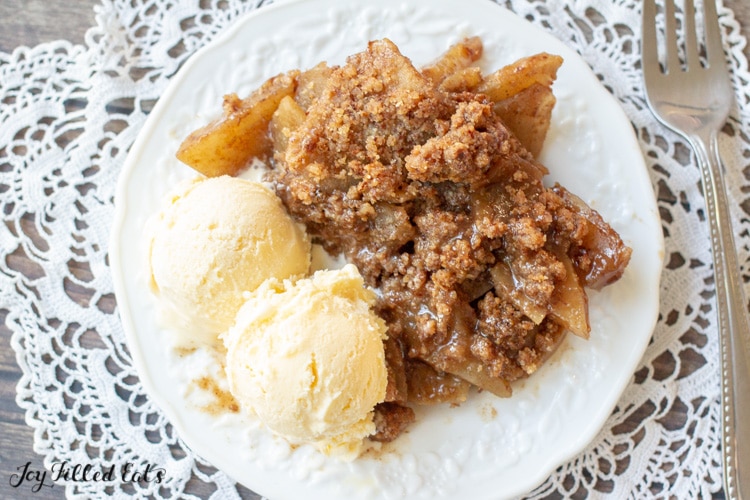 How Do You Store Keto Apple Crisp?

After the low carb apple crisp has completely cooled, you can wrap it up and place it in the fridge. Use a piece of plastic wrap or aluminum foil then put it inside of a container that has a tight-fitting lid. It needs extra protection to keep it fresh longer. Typically the homemade apple crisp will last in the fridge for 3-4 days. I do keep all my low carb desserts in the fridge.

I like it both cold and warmed up. You can warm up individual servings in the microwave.

What Should I Serve With Low Carb Apple Crisp?

I love the classic combination of low carb keto vanilla ice cream with any type of apple dessert. Other good choices are whipped cream or just a little powdered sweetener sprinkled on top. 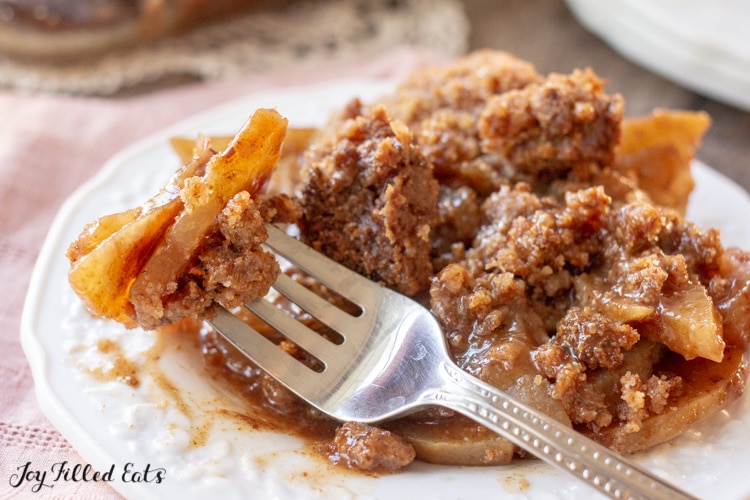 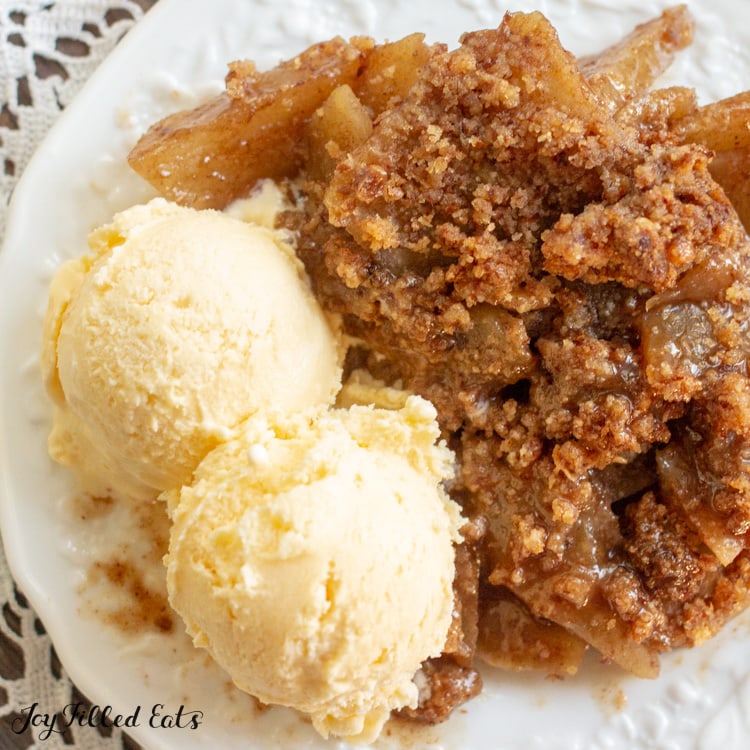 Instant Pot: you can soften the jicama in the instant pot by cooking it on manual high pressure for 30 minutes with 1 cup of water and then letting the pressure release naturally. Prep Time: prepare the jicama up to a day in advance and refrigerate it before making the crisp. It will save some time the day of making it when you are in a hurry.  To Reheat: place the keto apple crisp in a microwave-safe bowl and warm it up for 25-30 seconds or until hot. Check it often because it will heat up quickly and will most likely have hot spots.  To Freeze: wrap up the cooled low carb apple crisp and put it inside of a food container in the freezer for up to one month. Warm in the microwave after it has defrosted. The texture may be slightly different after being frozen.