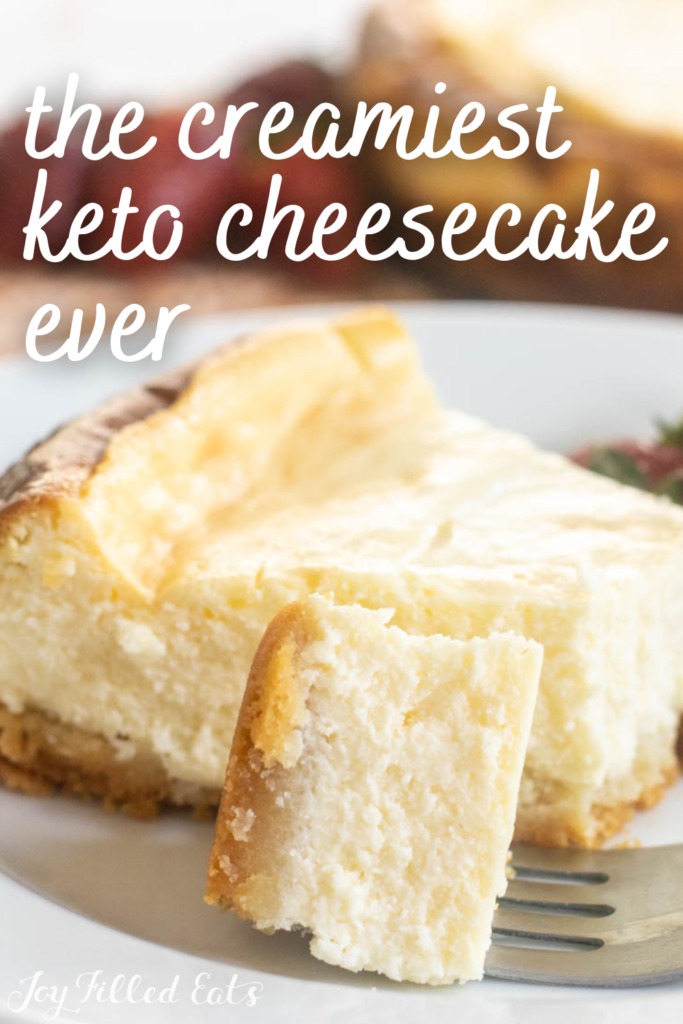 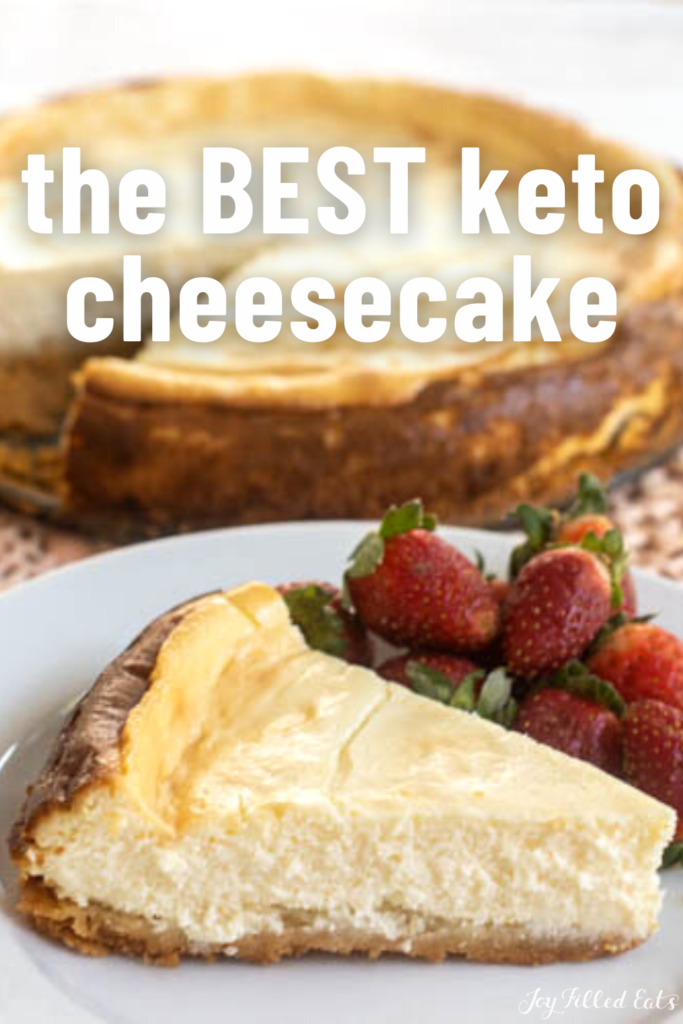 This Keto Cheesecake is the easiest and most mouth-watering cheesecake that you can make. Even a beginner baker will be able to follow the steps in this recipe and finish the cake easily. This low carb cheesecake is a big hit in the keto community. With just a hint of vanilla and a beautiful but easy crust, this is one cake that you can enjoy guilt-free and even share with your friends and family on special occasions. And very best of all, it is low in carbs. 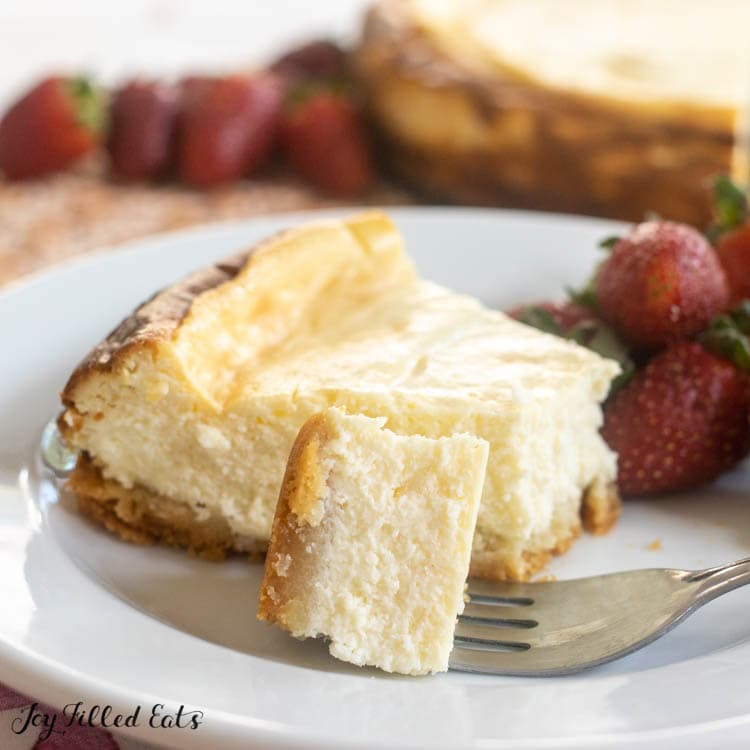 Everyone in our house is crazy about this low carb keto cheesecake - and why wouldn't they be? It's so creamy and luxurious, and I find all of us literally savoring every bite.

What I really enjoy about this simple cheesecake recipe is that it's really, really simple to do. And let's not forget the fact that it doesn't have to bust your low carb eating just by having a slice!

It's time to change the way we think about desserts and see that there are options out there to enjoy good food without having the heavy burden of all the carbs.

I enjoy this cheesecake without any toppings because the taste really does a great job of standing out! Whip this up and see what you think!

I have a feeling that you might just be making this keto cheesecake again and again to share with your family and friends. This is one recipe that will prove to them that eating low carb is anything but dull.

Be sure to check out my Keto Chocolate Chip Cheesecake Bars for another fun low carb dessert. Both are great options to have and share with others. 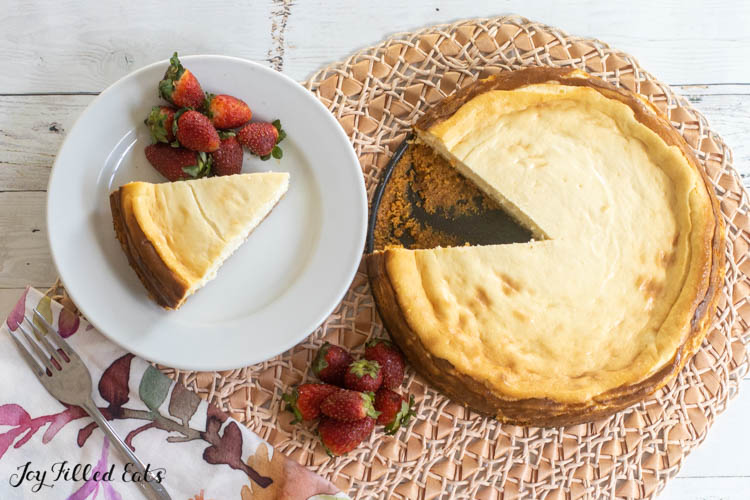 Almond flour - This is used to make the crust of the cheesecake. It's a great texture, adds a nice flavor, and gives nutritional value to the crust, too.

Butter - This is paired with the almond flour to help the crumbles form together to create the bottom crust.

Cream cheese - Shall we say that this is the star of the show? The cream cheese gives this cheesecake the lightness and texture that is a MUST.

Sour cream - Use this to mix with the cream cheese to thin it out.

Joy Filled Eats Sweetener - The perfect way to add sweetness to the cheesecake without adding carbs. I use a blend of erythritol, xylitol (or allulose), and stevia in my recipes. It is twice as sweet as sugar so you use less and have less of an aftertaste.

Eggs - Large eggs work great for adding to the cheesecake filling mixture. They'll also help to not make the keto cheesecake so dense.

Vanilla - Adding vanilla extract is a great flavor, but pure vanilla is the best! 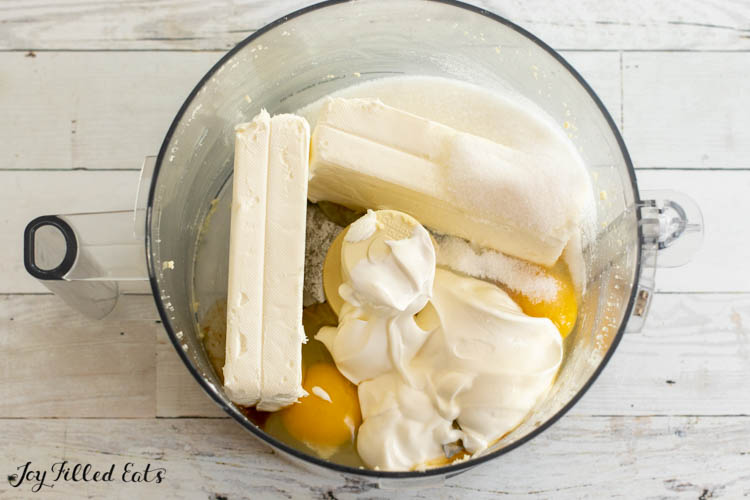 How to Make Keto Cheesecake

Follow the step-by-step process to make the crust and the cheesecake from scratch.

Step Two: Combine the crust ingredients in a food processor and process until well combined. 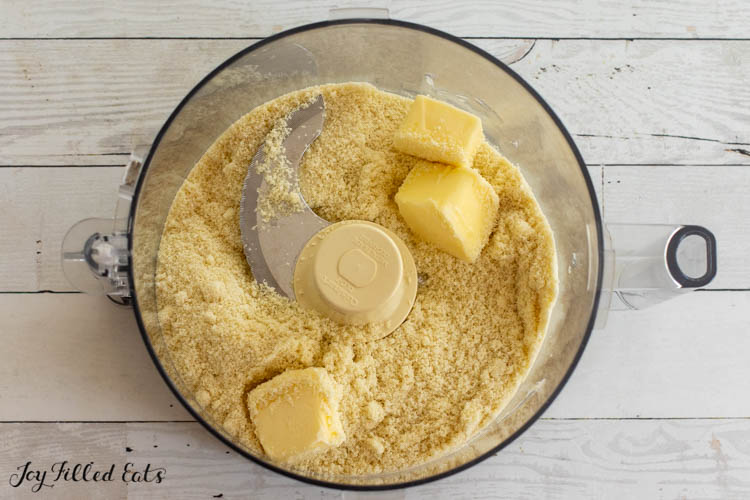 The gluten-free mixture will resemble sand as far as texture goes. This is how you know it's combined well. 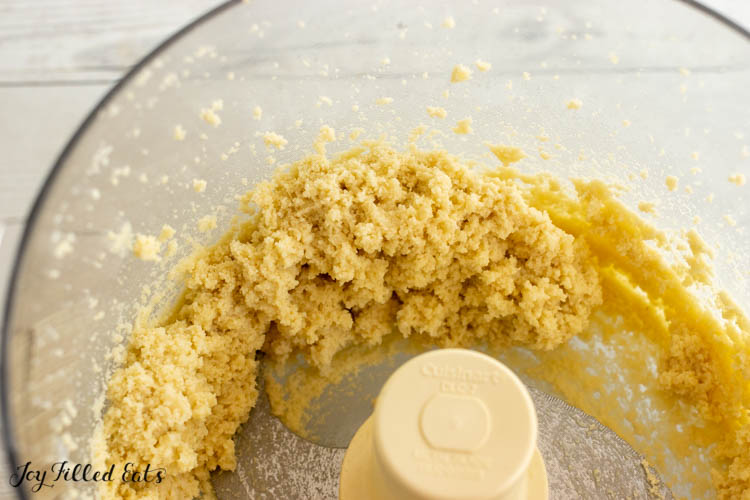 Pour into the springform pan and press down firmly using your fingers or the back of a spoon.

Expert Tip: If you don't have a springform pan you can make this in a deep-dish pie plate. 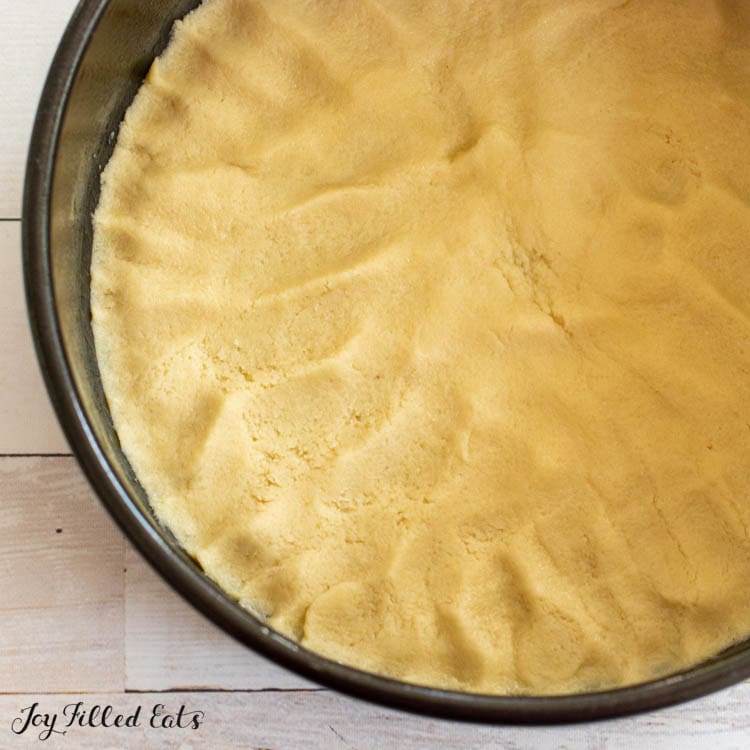 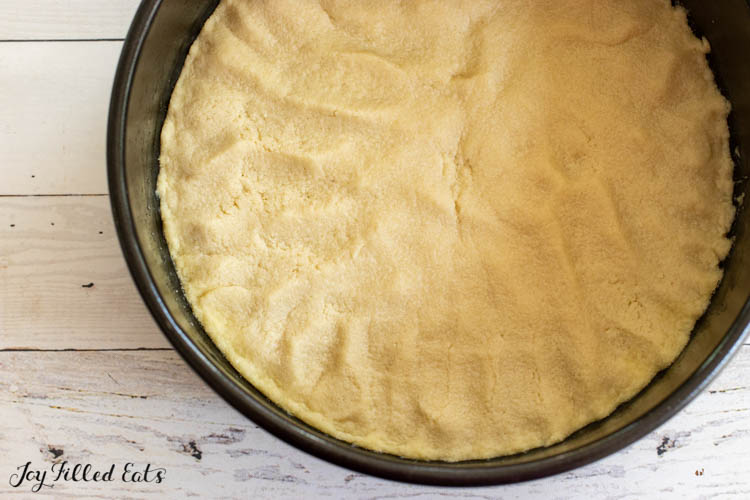 Step Four: Meanwhile, process the cream cheese in the food processor until smooth. Add the sour cream, eggs, vanilla, and sweetener. Process until well combined,  and scrape down the sides as needed.

Expert Tip: You can also use a large mixing bowl and a hand mixer. 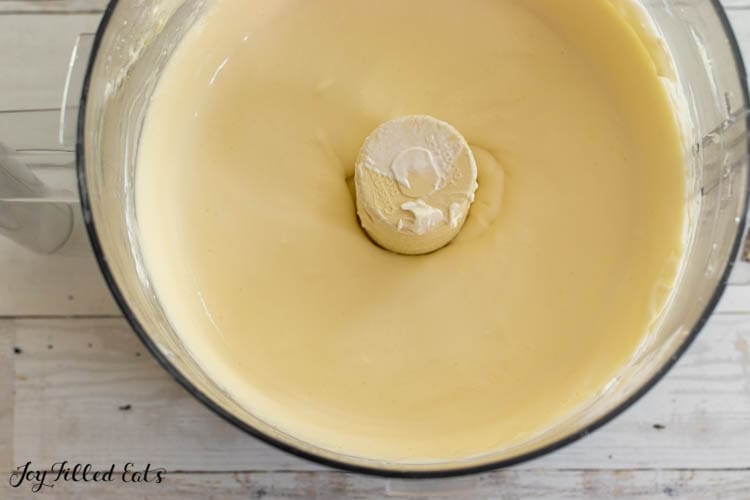 Step Five: After the almond flour crust has been partially baked, add the filling to the crust. 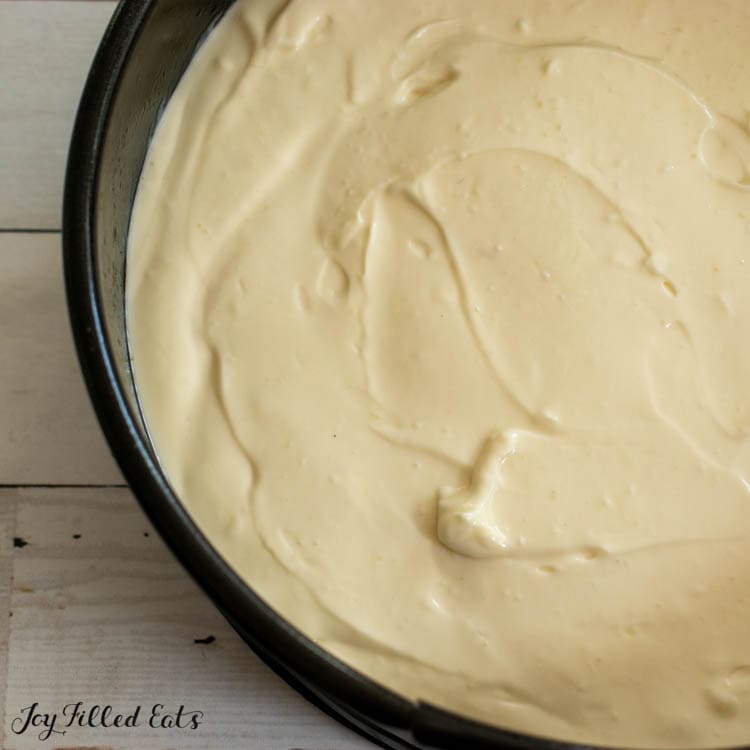 Step Six: Bake the keto cheesecake for 50-60 minutes or until the center no longer jiggles. It will rise and then fall. This is normal. Let cool to room temperature. 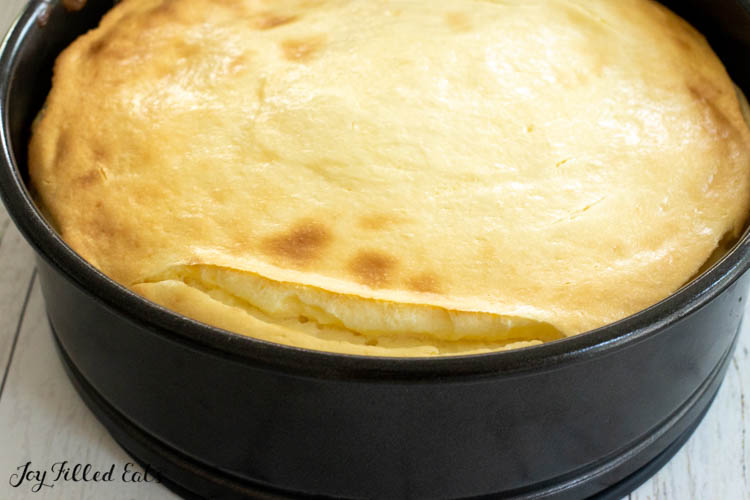 Chill the cheesecake for 3-4 hours before serving. 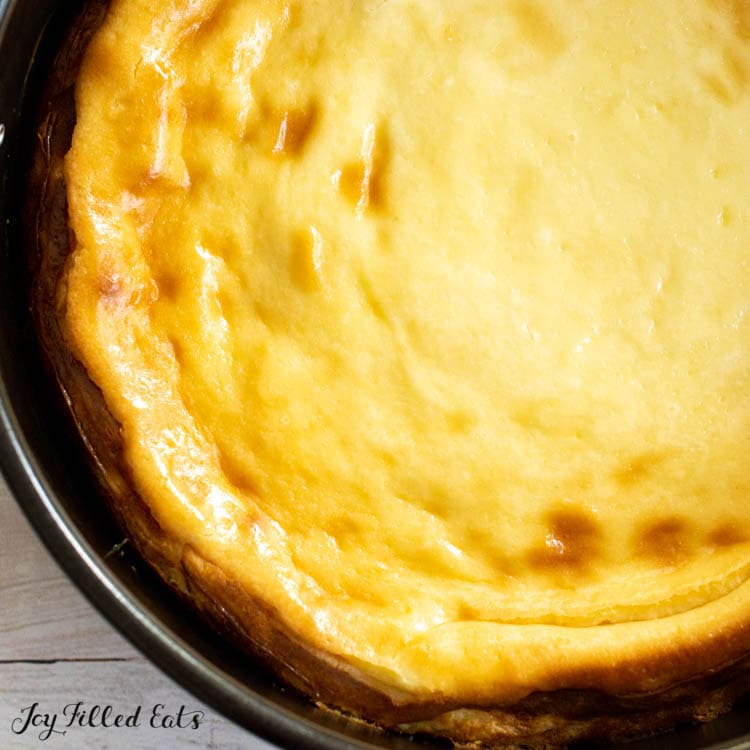 When it comes to cutting keto cheesecake recipes, be sure that you let it cool down completely in the fridge.

Use a sharp knife to cut it into individual slices for the best results! You'll more than likely have cheesecake residue on the knife after each slice, so wiping it off and then drying the knife before cutting your next piece will help it slice really well, also.

No-bake - While you can't easily convert this exact recipe to be no bake I have several other no-bake cheesecakes! Try my No-Bake Cookie Dough Cheesecake, Keto Blueberry Cheesecake, or Keto Lime Cheesecake.

Nut-free - Swap out the almond flour in the crust for sunflower seed flour. That be used 1:1 in place of almond flour.

Caramel pecan - Top the cooled cheesecake with my Keto Caramel Pecan Sauce for an amazing combination.

Chocolate swirl - Pour ⅔ of the batter into the pan. Then add ¼ cup of cocoa powder and an extra 2 tablespoons of sweetener to the remaining batter. Combine thoroughly. Drop dollops on top of the batter in the springform pan and swirl gently. Bake the keto cheesecake as directed. 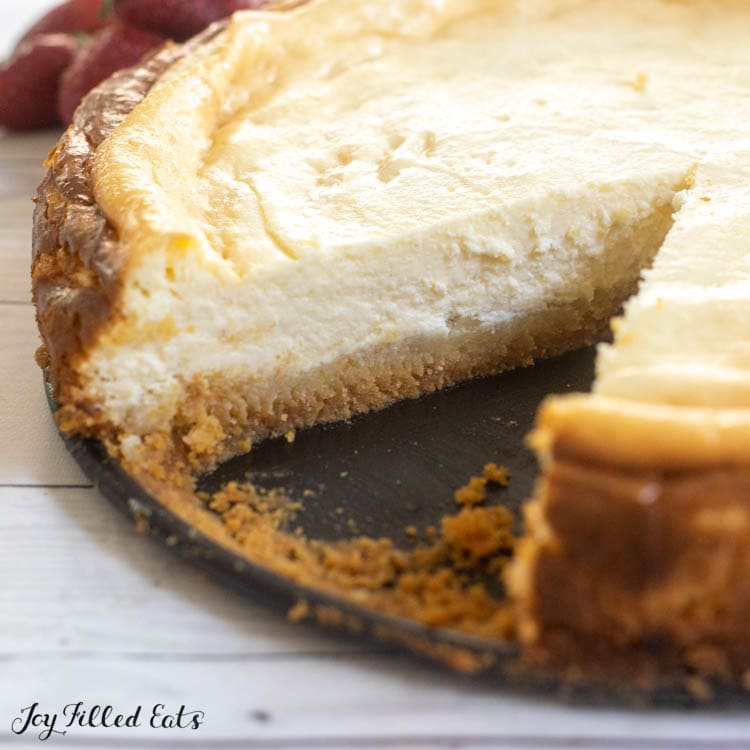 Absolutely, this is one of the main ingredients that people love using while on the keto diet. It adds richness, creaminess, and flavor, all while adding texture and taste.

The great thing about using cream cheese is that it can be used in savory dishes or sweet dishes, making it really versatile for the keto lifestyle. It's in so many keto dishes for that reason!

How do I know when a cheesecake is done baking?

How many carbs are in cream cheese?

Using 1 ounce of cream cheese means that you'll be adding just under 1 carb to your meal. That's easy to track, and not many carbs at all!

If you're a visual person like me, you can use a food scale to measure out what an ounce of cheesecake looks like, just so you know! 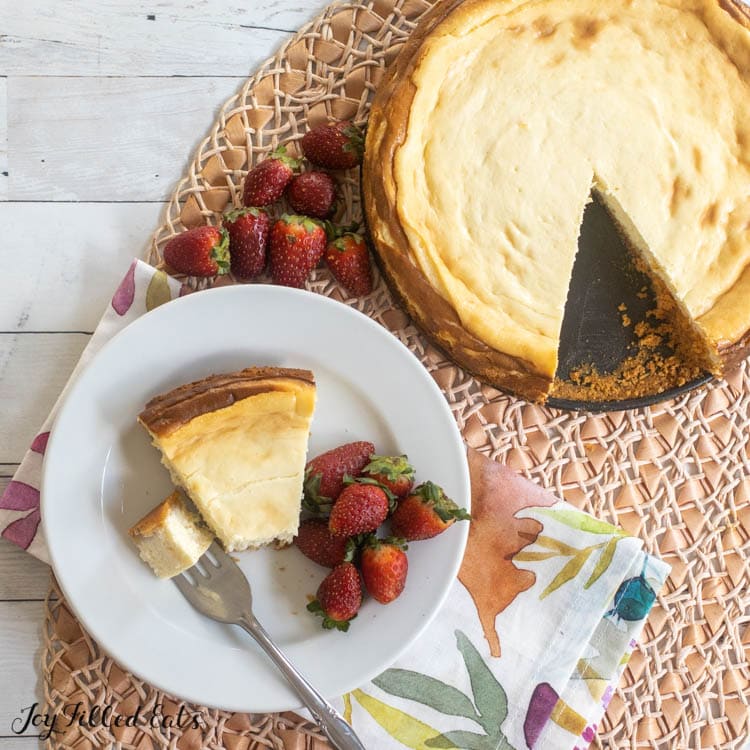 How many carbs are in cheesecake?

Cheesecakes that aren't keto have a lot of carbs. Some have up to 25 grams of carbohydrates per slice! This low carb cheesecake is WAY different, and each slice of cheesecake only has 6 net carbs.

What toppings are good on keto cheesecake?

There are so many ways that you can add toppings to a cheesecake. Keep in mind that the nutritional facts in the recipe card below are for just a plain slice of cheesecake, so adding toppings is going to change those values.

Some ideas for cheesecake toppings include fresh fruit, frozen fruit, sugar free chocolate chips, coconut flakes, or any other carb friendly topping that you want to add.

The great thing about keto dessert recipes is that they're really easy to add toppings to. And if you're worried about an aftertaste, this is where toppings shine!

I've even added fresh berries to the blender before with a little bit of full-fat cream cheese and my powdered sweetener and poured a little bit of that on top of my cheesecake slice.

You can even have fun with the toppings and add the toppings AFTER you slice the pieces. That way, each piece is uniquely different and delicious. (also - adding lemon juice and strawberries is so good!!!) 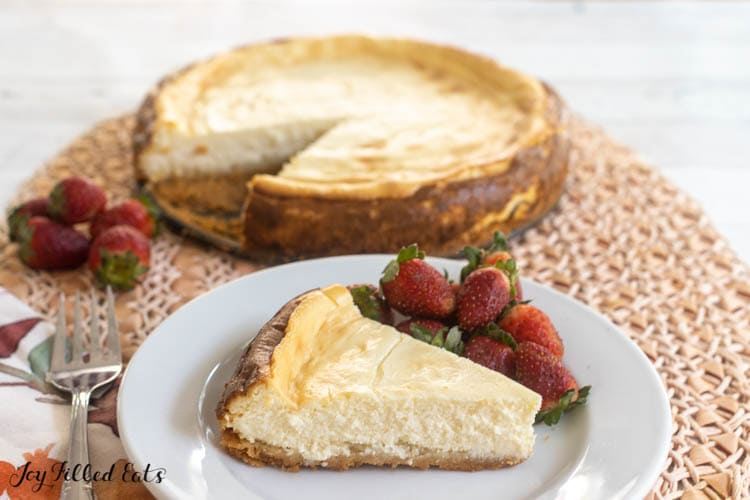 How do I store leftovers?

More than likely, there will be leftovers of this low carb cheesecake - and that's just a bonus! Having cheesecake leftovers means that you get to enjoy the taste and flavor all over again.

Can I freeze keto cheesecake?

Yes, cheesecake can be frozen! It actually freezes really well. The hardest decision that you'll have to choose between is if you're going to freeze it in slices or freeze it whole - and either option works great.

Store it in a freezer-safe container for up to 1-2 months. I actually like freezing mine in pieces because it helps with portion control.

When I want a slice of cheesecake, I can just unthaw a piece rather than have to unthaw the entire cheesecake, and that makes it last longer as well.

Just be sure to cover and secure it well when you're freezing the cheesecake. You can use aluminum foil and plastic wrap to add layers for peace of mind!

Also, wait to add any toppings to the cheesecake until after you unthaw it, as this helps with the texture. 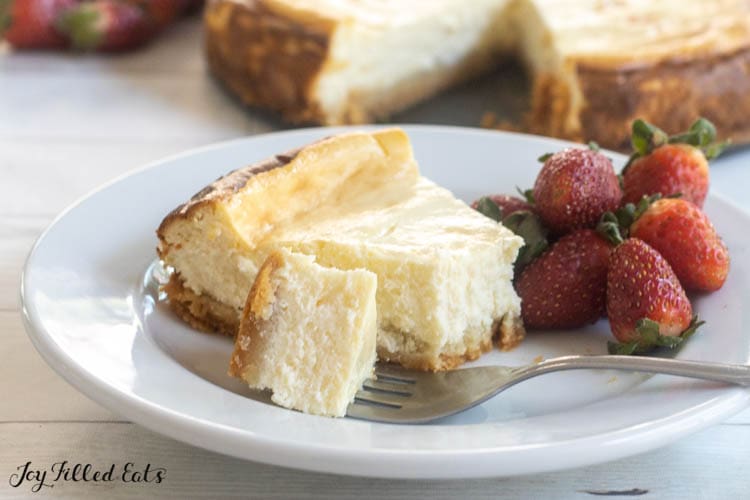 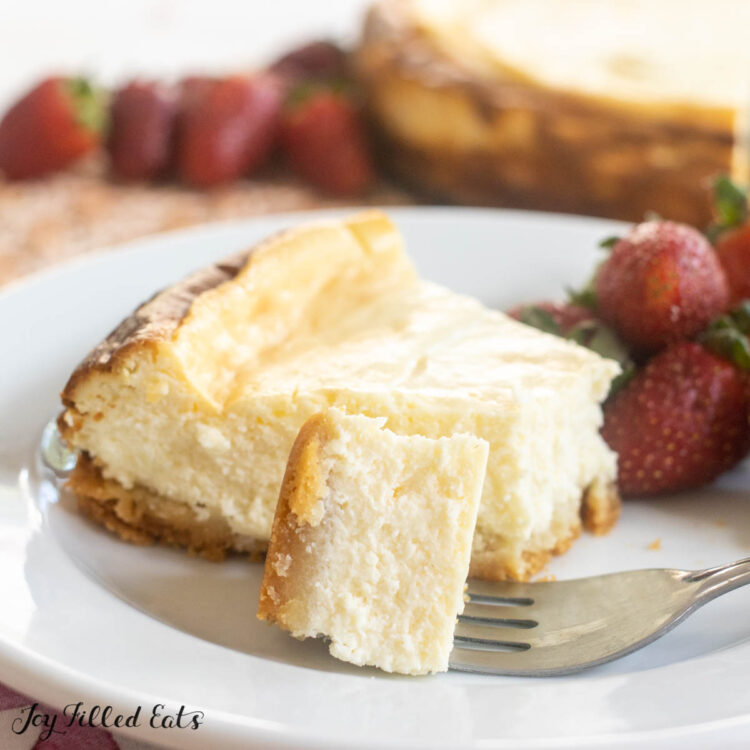 Nutrition: The nutrition facts are for one serving. A serving is 1/10th of the cheesecake. There are 4.3 NET carbs per serving. Springform Pan: The baking time listed is for an 8-inch pan. If you use a larger pan reduce the time. A standard cheesecake pan is normally 9 inches and may cook in as little as 40 minutes since it will be thinner. This can be made into bars, mini cheesecakes, etc. just adjust the time accordingly. To Store: Place the cheesecake in the fridge for up to 5 days. Keep it in a covered container. To Freeze: Either slice the cheesecake into pieces and store it in small containers or freeze the entire thing—Thaw in the fridge before serving. Notes on Sweeteners:
I use my own blend of xylitol, erythritol, and stevia in my recipes. This is twice as sweet as sugar. It is comparable to Trim Healthy Mama Gentle Sweet and Truvia.
To sub in Swerve or Lakanto Monk Fruit use 1.5 times the amount of sweetener called for.
To sub in Pyure or Trim Healthy Mama Super Sweet use half the amount of sweetener called for.
Substitutions will work in most recipes. They may not work in candies, such as caramel. 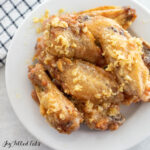 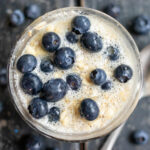 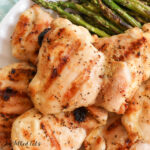