This post may contain affiliate links which won’t change your price but will share some commission.
37224 shares
Print Recipe Jump to Recipe 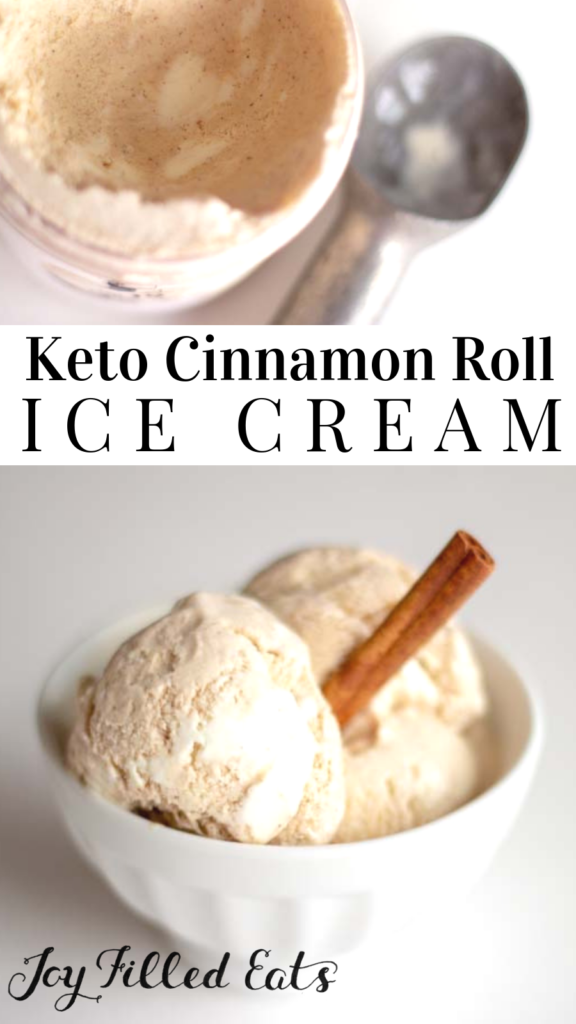 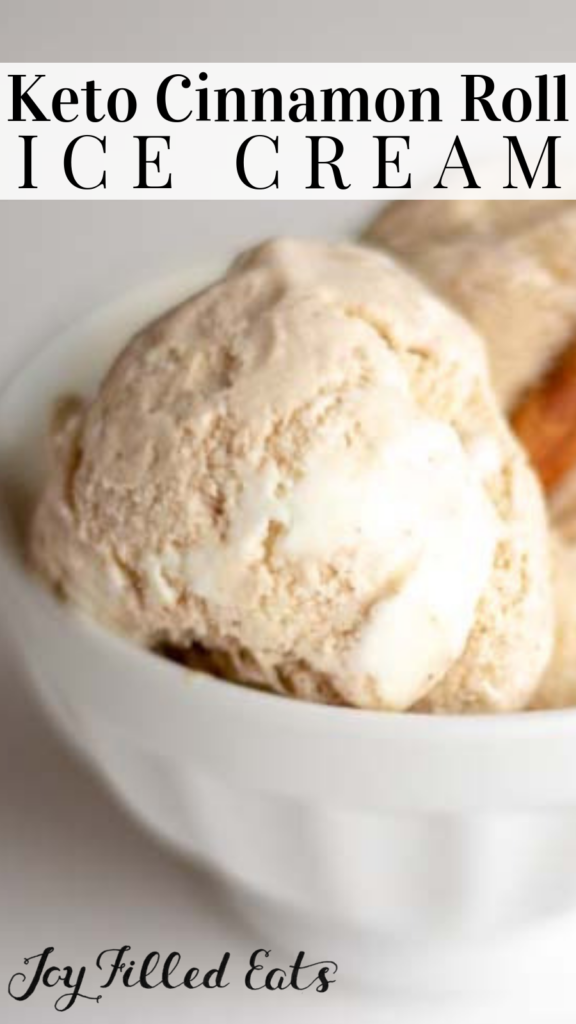 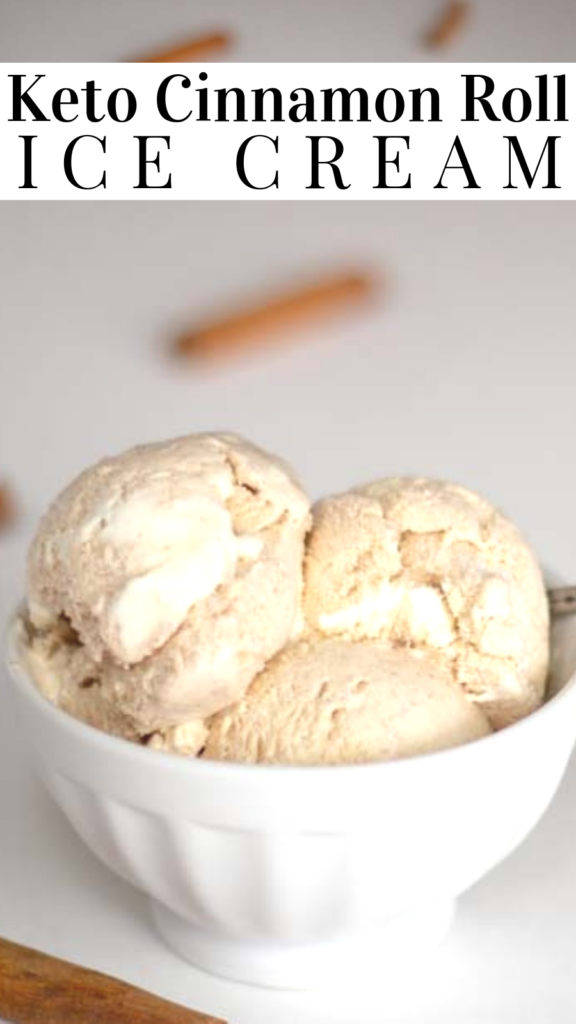 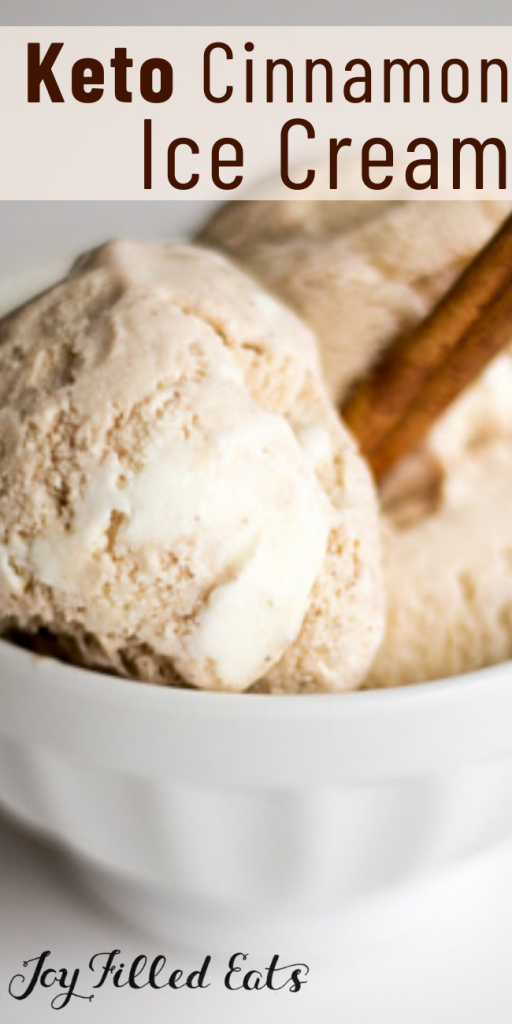 This cinnamon roll ice cream is sweet, creamy, with the spice of cinnamon and a ribbon of fluffy cream cheese icing running through it. This easy recipe is low carb, keto, gluten-free, grain-free, sugar-free, and Trim Healthy Mama friendly. 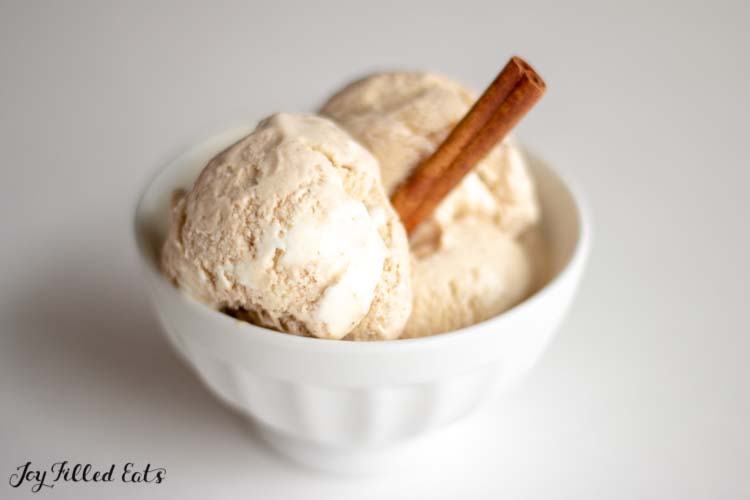 I don't stop craving my cinnamon rolls in the summer but the heat makes me think again before turning on the oven to bake some. Once upon a time, I had the most fabulous cinnamon ice cream at The Bent Spoon in Princeton, NJ on a trip with my husband. If you ever end up in Princeton, New Jersey make sure to visit. The ice creams from The Bent Spoon are the best I've ever tried. They are worth the cheat. But, alas, my waistline cannot have sugary ice cream every day if I want to be able to button my jeans so I wanted to create a healthier version of that yumminess in my home kitchen today. 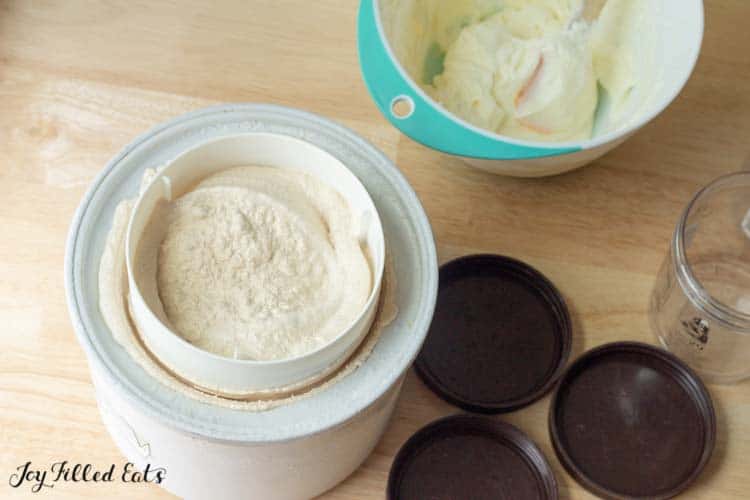 I also love the combination of cinnamon and salted caramel (which is the topping I got that fall day in Princeton). I bet you could swirl in a batch of my caramel sauce (double this salted caramel recipe) in place of the cream cheese icing. Adding the glycerin will ensure it won't freeze solid. Once this is gone I need to try that myself!

This makes a generous 1.5 quarts or 3 pints of cinnamon ice cream. I filled three pint-sized containers and we had enough left to taste test. 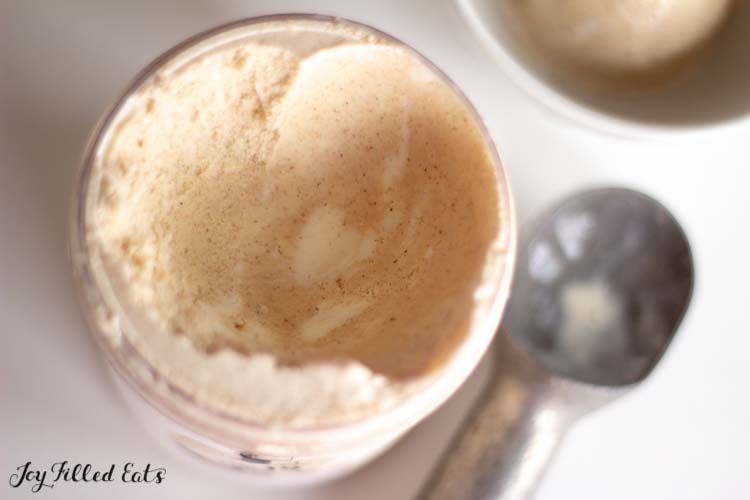 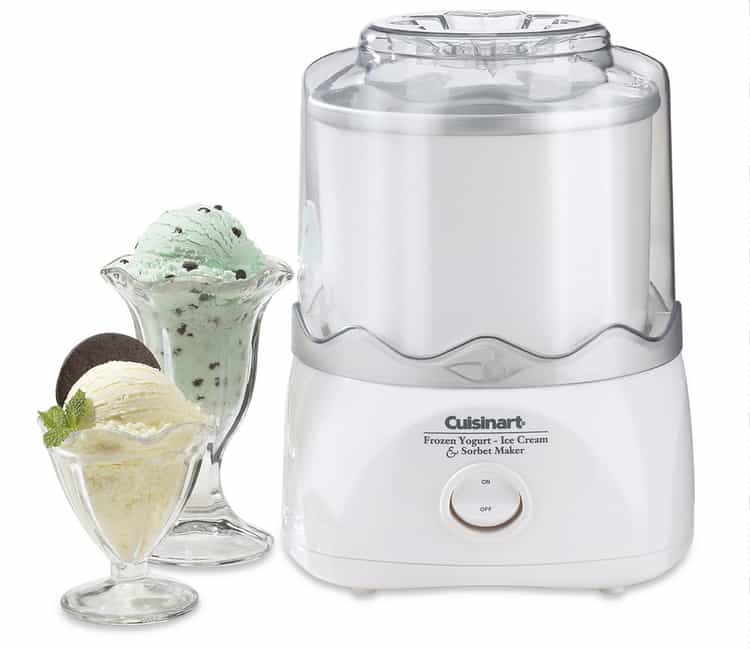 Ice Cream Machine: I get a lot of questions about making ice cream without an ice cream machine. You can make this recipe as popsicles but if you just pour it into a bowl and freeze it will freeze too firm to scoop. I have this Cuisinart 1.5 Quart Frozen Yogurt-Ice Cream Maker which is worth every penny. I've had it for over 10 years and it still works perfectly. If you compare the cost of an ice cream maker and ingredients to specialty low carb pints of ice cream it is the better choice to make your own. I bet by the time this summer is over you'll have recouped your $45. 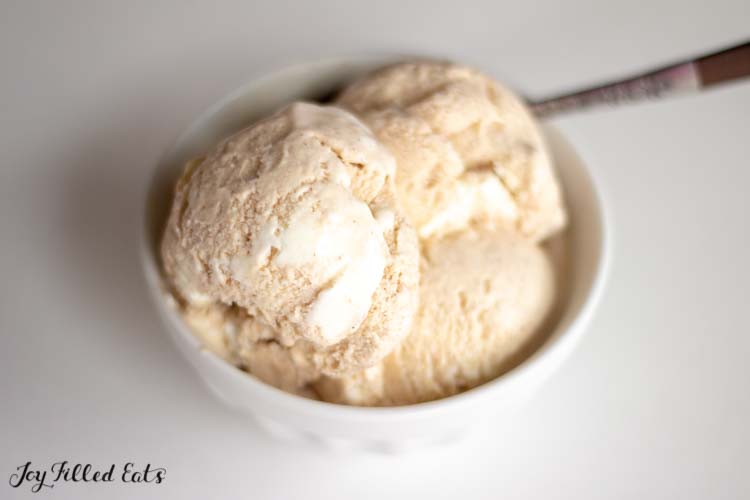 What to serve Cinnamon Roll Ice Cream with?

A spoon! You really don't need any fancy toppings for this one. But it goes great with fall baked goods. Here are my favorite pairings: 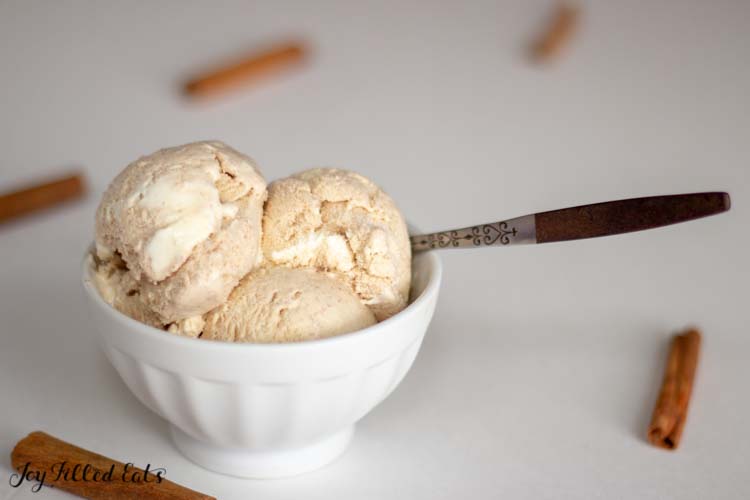 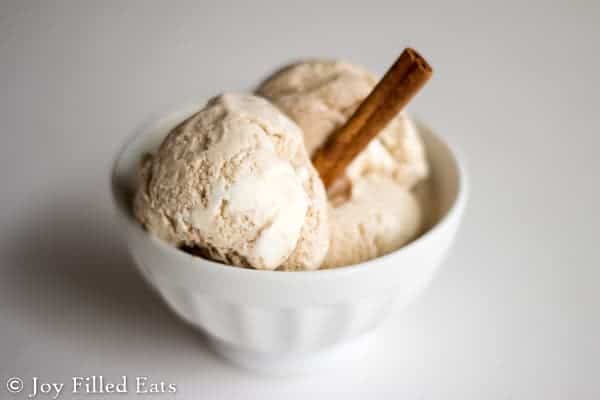 *****You can use pasteurized eggs if you are worried about consuming raw yolks or you can temper the ice cream base. There are instructions here: http://simmerandboil.cookinglight.com/2015/06/24/how-to-temper-eggs-ice-cream/ Notes on Sweeteners:
I use my own blend of xylitol, erythritol, and stevia in my recipes. This is twice as sweet as sugar. It is comparable to Trim Healthy Mama Gentle Sweet and Truvia.
To sub in Swerve or Lakanto Monk Fruit use 1.5 times the amount of sweetener called for.
To sub in Pyure or Trim Healthy Mama Super Sweet use half the amount of sweetener called for.
Substitutions will work in most recipes. They may not work in candies, such as caramel. 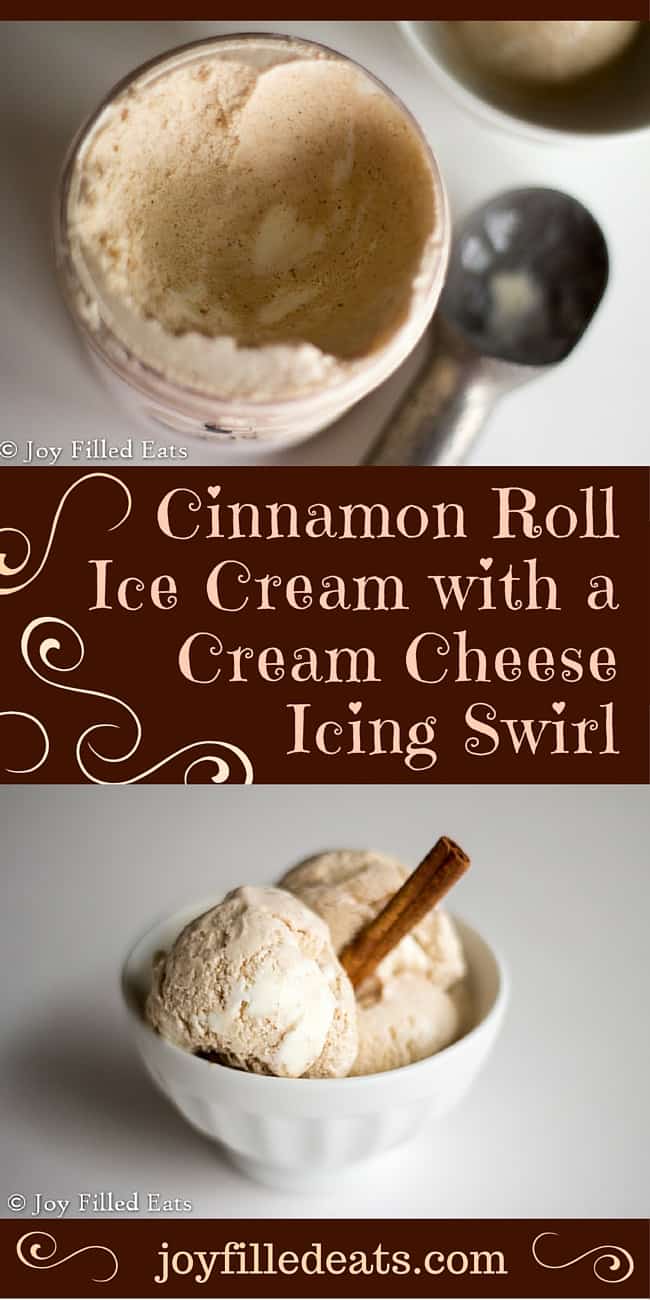 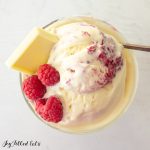 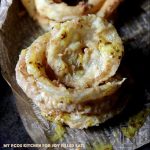 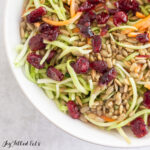 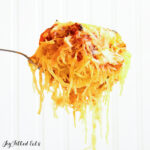