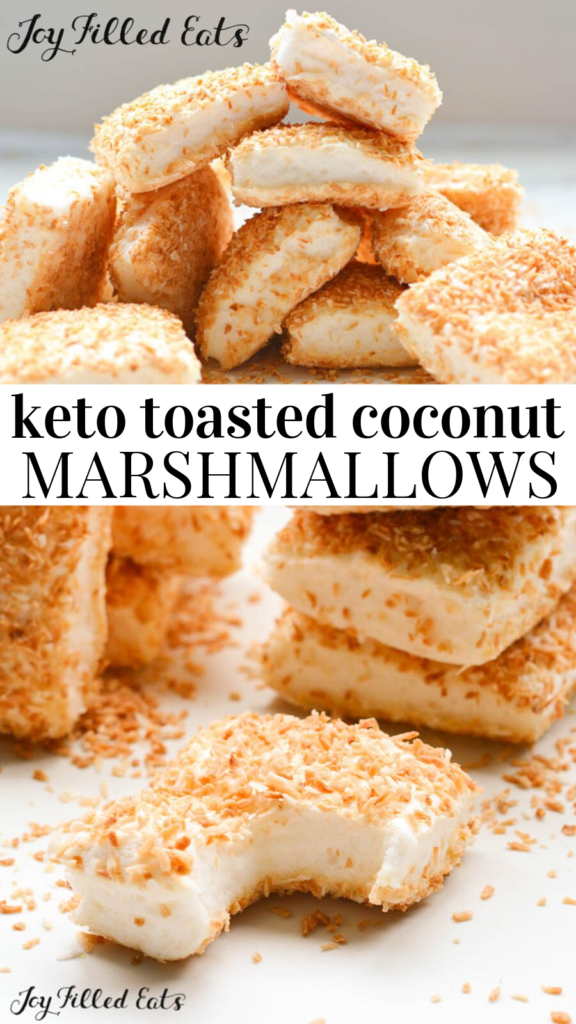 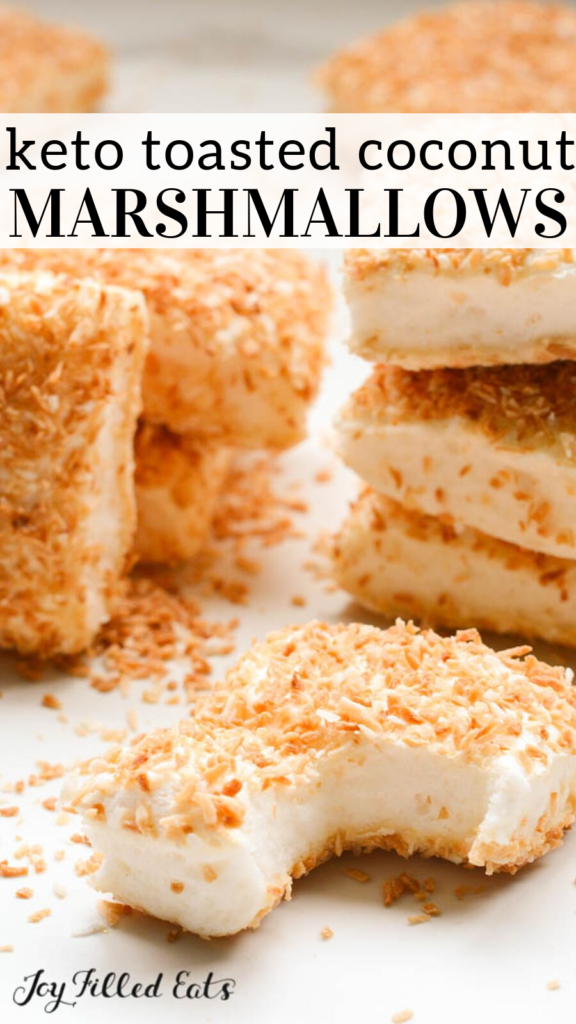 These super easy Sugar Free Marshmallows are soft and pillowy like a delicious cloud! Try them today and you can thank me later! 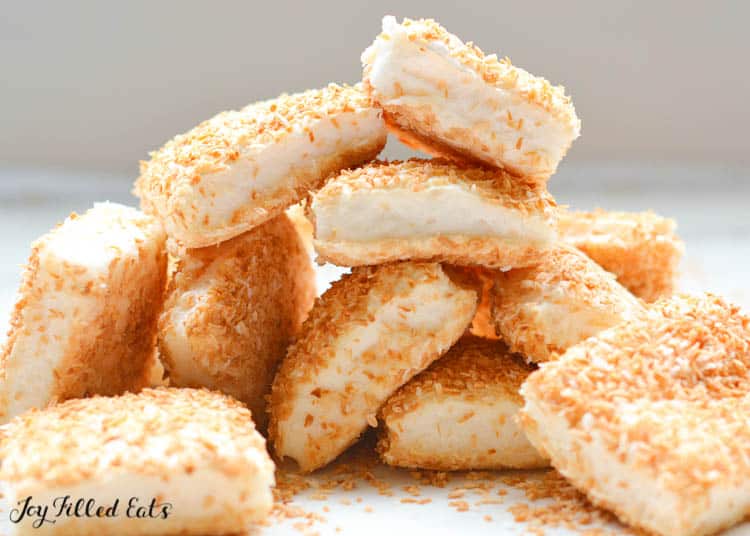 Hi there, Joy Filled Eats family! I am thrilled to be here and share with you one of my favorite recipes: Toasted Coconut Marshmallows. Once I realized how quick and easy it is to make homemade sugar free marshmallows, it was a game-changer. I will never go back! Homemade marshmallows are so much better than the store-bought ones full of corn syrup and preservatives too. They are softer and squishier and you can add different flavorings to play with the taste. They aren't quite as chewy or stretchy as the store-bought ones, but they are delicious. And guilt-free! 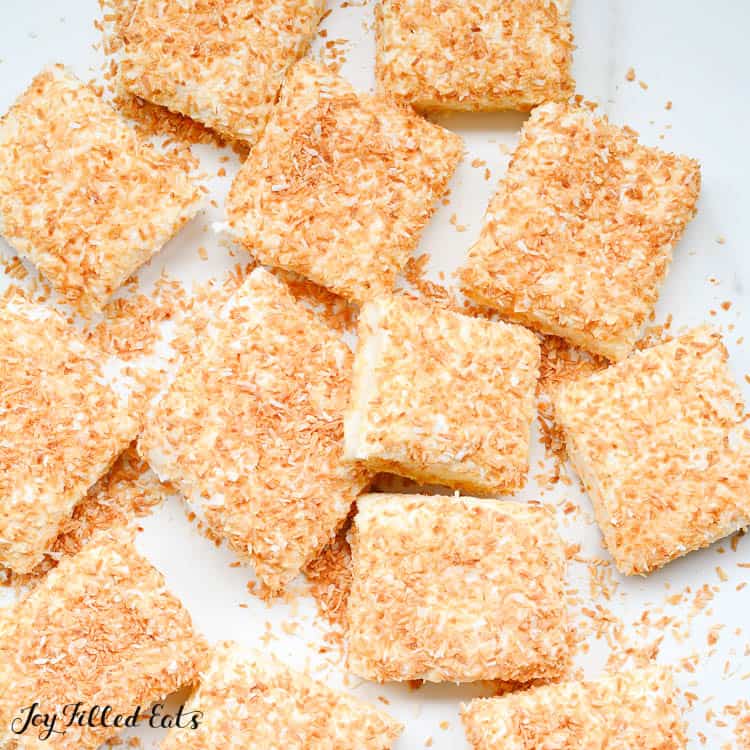 Try my other delicious homemade marshmallow recipe- my version of Peeps! Yum!

I love toasted coconut in all forms. Try my recipe for Toasted Coconut Butter (and my son's favorite Toasted Coconut Butter Candy!) So one day when I was about to make a batch of my Homemade Peeps for the millionth time, I decided I wanted to try something different and decided pretty quickly to use toasted coconut. Boy am I glad I did that because these marshmallows are now one of my favorite go-to quick recipes when I need something quick and delicious to make for an after-school snack. 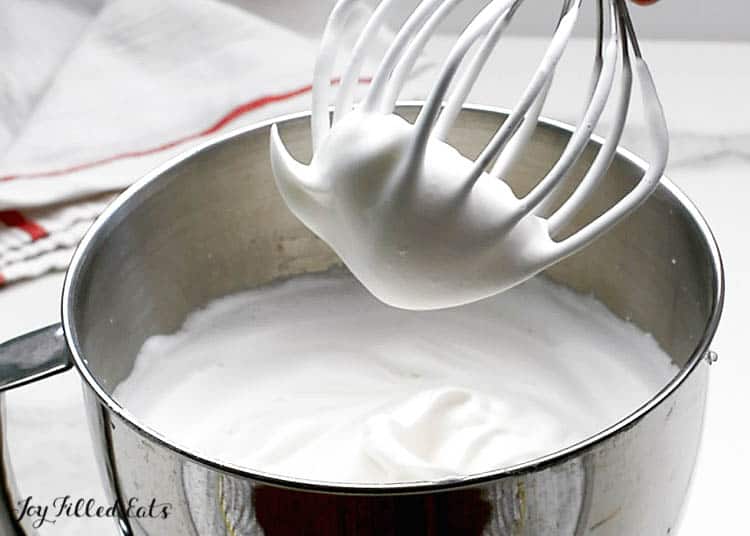 The first time I made homemade sugar free marshmallows I thought it was like magic! You make a meringue and then add gelatin and whip it up and it thickens and gets glossy and magically turns into sticky, gooey marshmallow before your very eyes!

How to Toast Coconut

Toasting coconut couldn't be easier. Just take 1 or 2 packages of unsweetened coconut and spread it out on a baking sheet. Bake it at 350 for 5 minutes until it’s golden brown.

Sprinkle some toasted coconut into the bottom of a 9x13 pan. Pour your marshmallow into your prepared pan and spread it over the toasted coconut. It is best to move quickly at this stage because it sets up pretty fast and then it doesn’t spread.

Sprinkle some more toasted coconut on top and then let it set. I usually let it set for an hour or more. You can even leave it out overnight. You want it to dry out a little so that it gets less sticky and you are able to cut it. 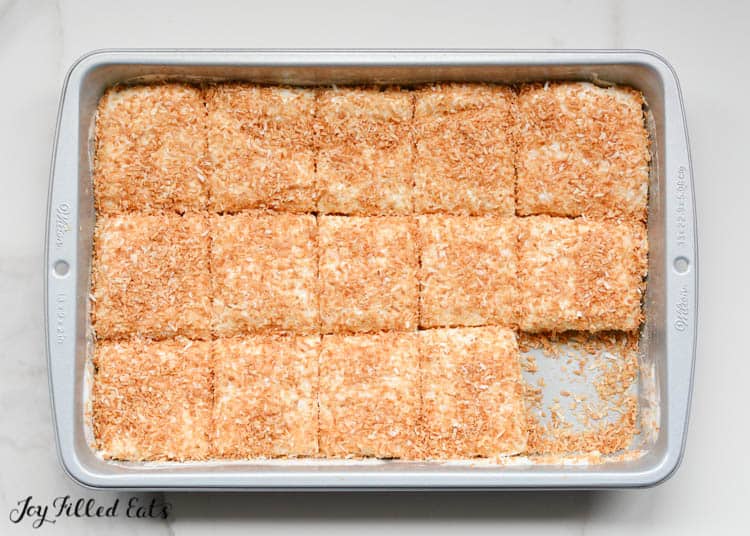 I love using coconut to decorate treats, like frosted cupcakes, Coconut Waffles with Strawberries, or these Vanilla Donuts with Toasted Coconut Glaze.

These marshmallows will last for a few days in an airtight container. If they get a bit stale and hard, they do soften up beautifully in the microwave. Just about 10 seconds or so and they become soft and gooey, just like the inside of a fire-roasted marshmallow.

These delicious marshmallows are also the inspiration for my Keto Smores Bars!

And for another treat for keto kids or kids at heart try these Keto Pop Tarts or Marshmallow Fluff Fat Bombs! 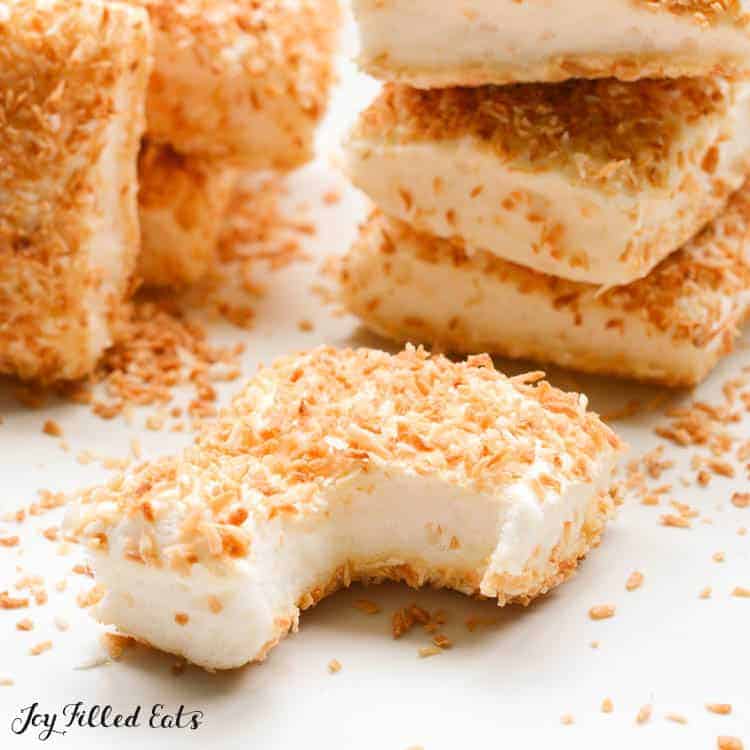