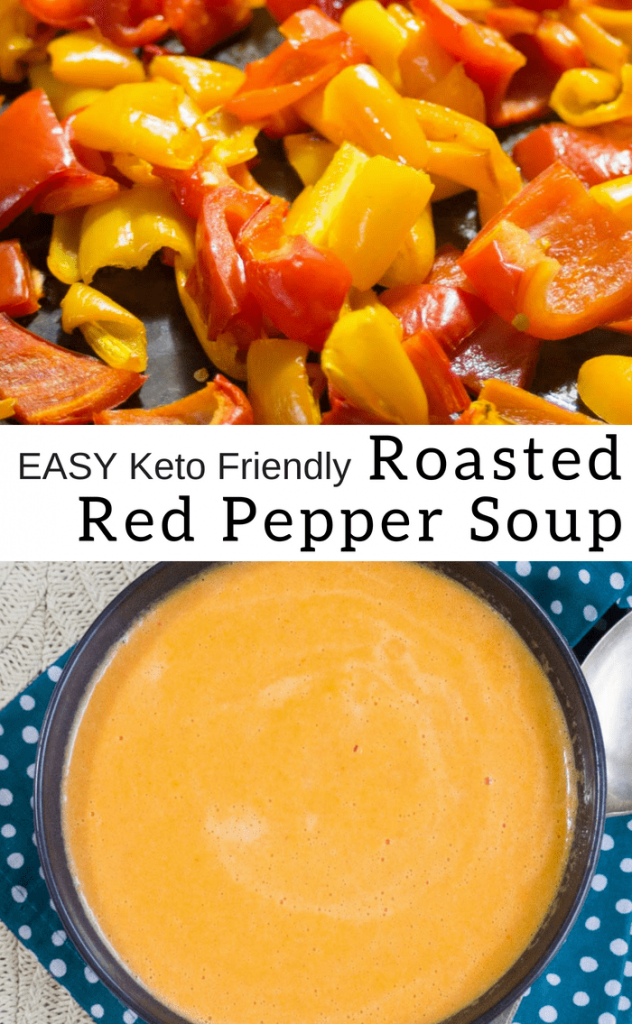 This Keto Red Pepper Soup is so much better than the store bought carton varieties. With only a handful of ingredients, it is as easy as roasting some veggies and using a blender. 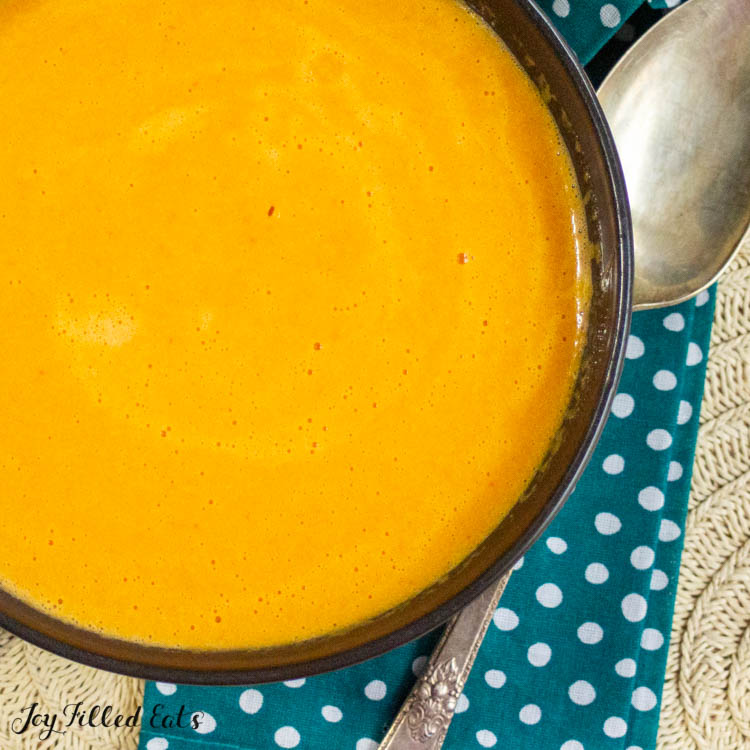 I love the color of this soup. I used a couple of huge red peppers and then some yellow and orange mini sweet peppers as well. If you use all red peppers, the color will be darker.

I enjoy this roasted red pepper soup with a salad on the side. It's light and creamy, and full of flavor with each and every bite. I tend to crave this more during the fall and winter months, but you can easily make it and enjoy it all year long. As long as you get get the peppers from the store, this simple pepper soup recipe is able to be created and savored without issue.

Speaking of easy soup recipes, be sure to check out my Keto Mushroom Soup as well. It's a great way to add in some protein without needed to cook up meat. 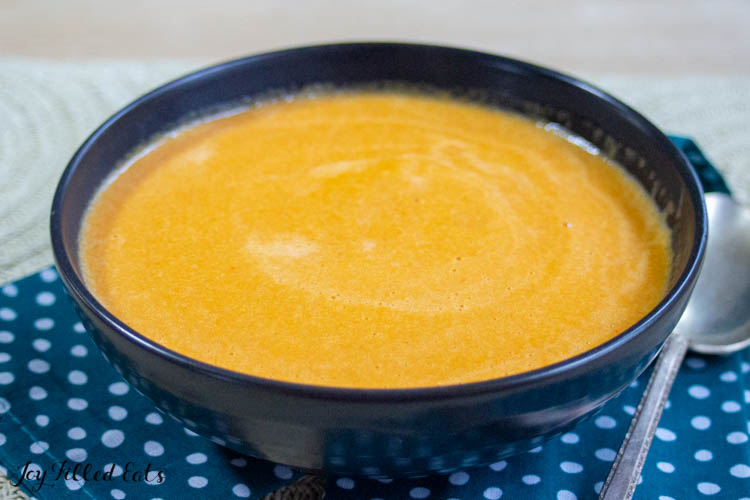 Minimal ingredients mean simple meal prep. All you need to make this bell pepper soup is listed below.

Sweet peppers - You can use any type of sweet peppers and any color. Have fun and change it up.

Chopped cauliflower - You can buy a head of cauliflower and chop it up in the food processor yourself, or you can buy it already chopped and riced at the store. Frozen cauliflower rice can be used as well.

Heavy cream or half and half - This adds that creaminess to the soup.

Salt - I generally use kosher salt or sea salt. You can salt your keto red pepper soup to taste.

Sugar-free sweetener such as my sweetener blend - Adds just a tad bit of sweetness to each bite. 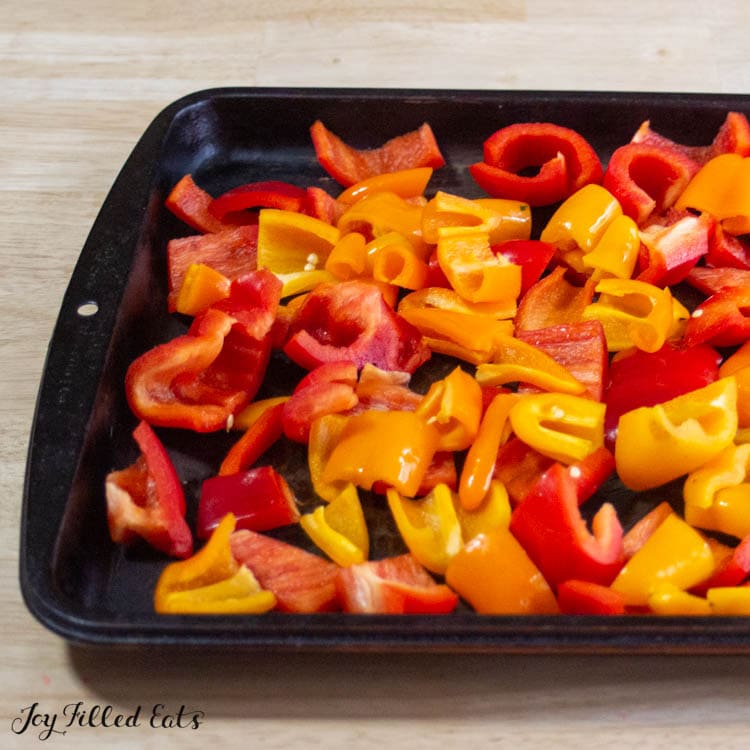 Making this low carb soup is fast and simple. With only 9 net carbs per serving, you're going to love this soup.

Step One: Put the sweet peppers on a large baking sheet. Roast at 400 degrees for 30 minutes or until softened and slightly browned. 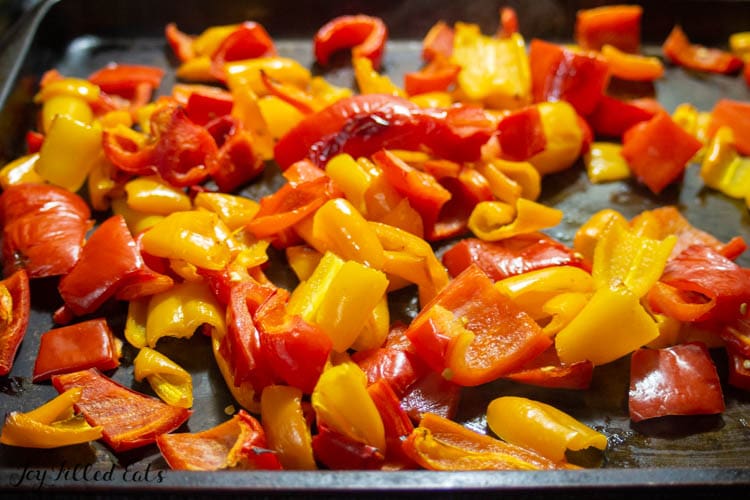 Once they're done, they'll be added to the blender to make them smooth and creamy while still having that roasted pepper flavor. 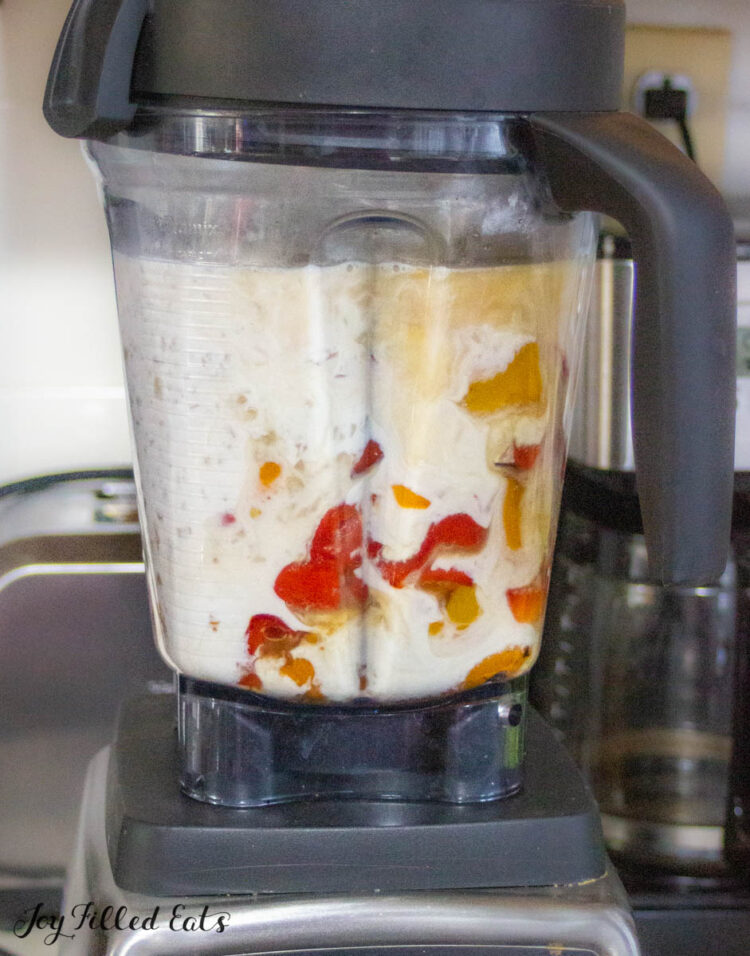 Step Two: Meanwhile, add the cauliflower and broth to a large stock pot. Simmer over medium until the peppers are done.

Step Three: Add the peppers, cauliflower, half the broth, and the remaining ingredients to a blender. Process until smooth. Add back to the pot and heat until hot. 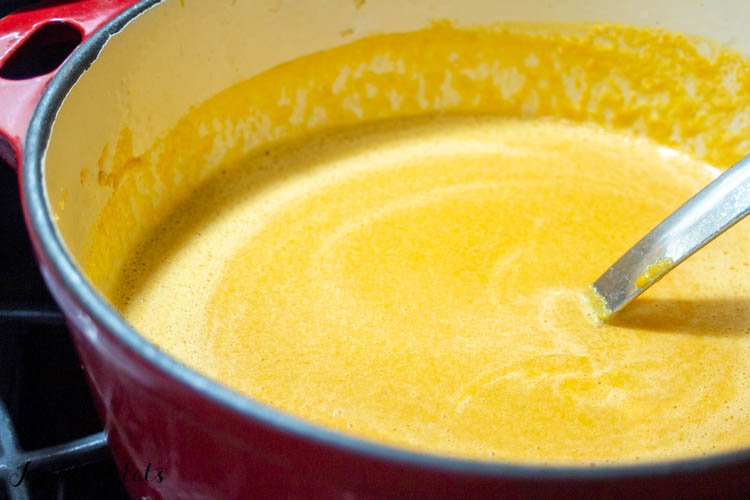 Add tomatoes - If you want to have even more sweetness, you can roast a few tomatoes and blend them up with the rest of the mixture.

Add meat - Even though this is meatless, you can add cooked sausage or cooked ground beef if you want to create more of a stuffed pepper soup recipe.

Add fresh herbs - Changing up the flavor of this soup isn't hard to do at all. Adding some fresh basil or black pepper is a great flavor enhancer. 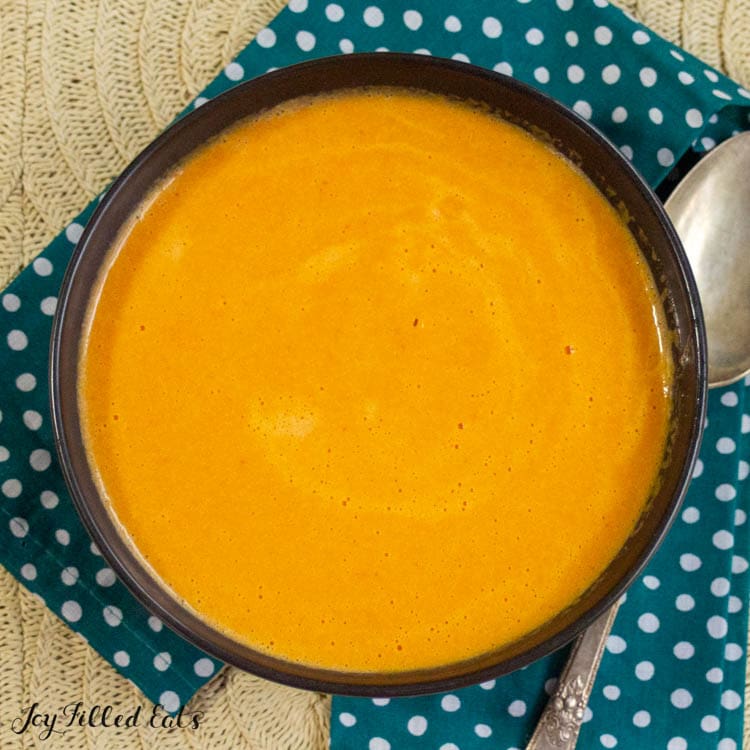 How to roast red peppers?

For a more intense flavor, you can roast the peppers longer and char the skin under the broiler. I just roasted these until they softened. Don't worry about the skin, either. You won't even know it's there after you puree this. Alternatively, you can roast them in the oven at 425-450 F.

This is a great way to use up peppers if they are past their prime. No one will notice slightly wrinkly peppers in a pureed soup.

Once the roasted red peppers are done, you just need to blend them with the other ingredients.

Can I really use all types of peppers for this soup?

I always like using red bell peppers because of the coloring that it gives the soup, as well as the sweet flavor. Keep that in mind as you change up peppers as the outcome of appearance will vary.

What toppings can I add to this soup recipe?

I'm all about adding cheese. Parmesan cheese is great, but you can also add some freshly chopped onions on top for a sweet crunch, too.

Just be sure that whatever toppings you're adding, they're keto-friendly and low in carbs so it doesn't take away from the balance of the soup.

I hope you enjoy this Roasted Red Pepper Soup! Serve it with some Keto Biscuits for a true comfort food meal! 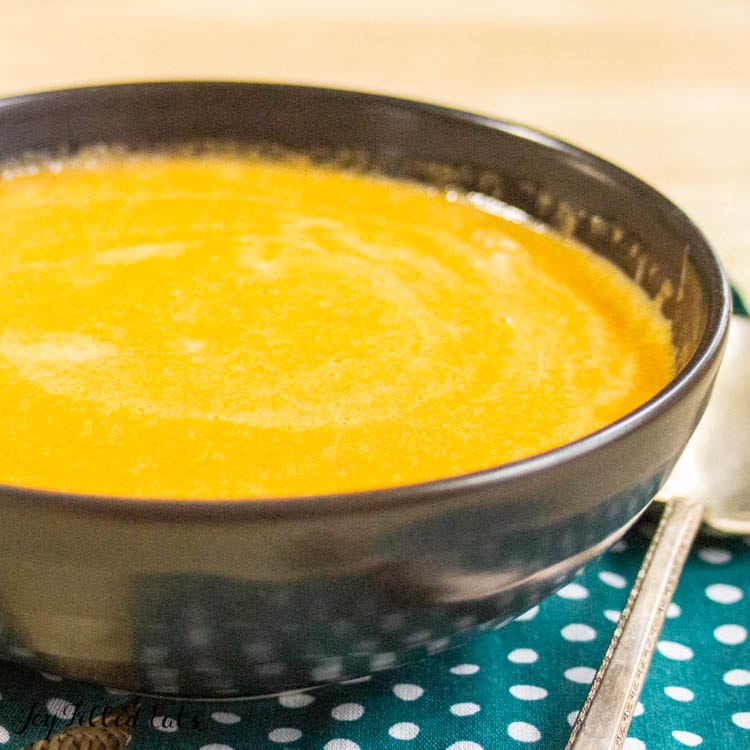 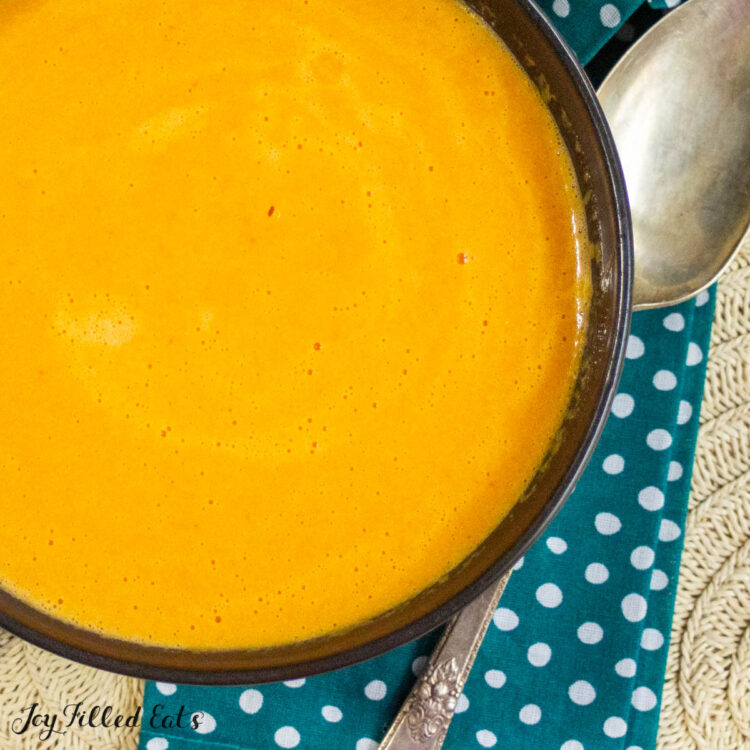 Nutrition: The nutrition facts are based on 12 servings. Each serving is approximately 6 ounces. There are 6.5 net carbs per serving. Lower Fat: If you would like to reduce the fat you can use half and half instead of cream.

Love soup? Check out these: