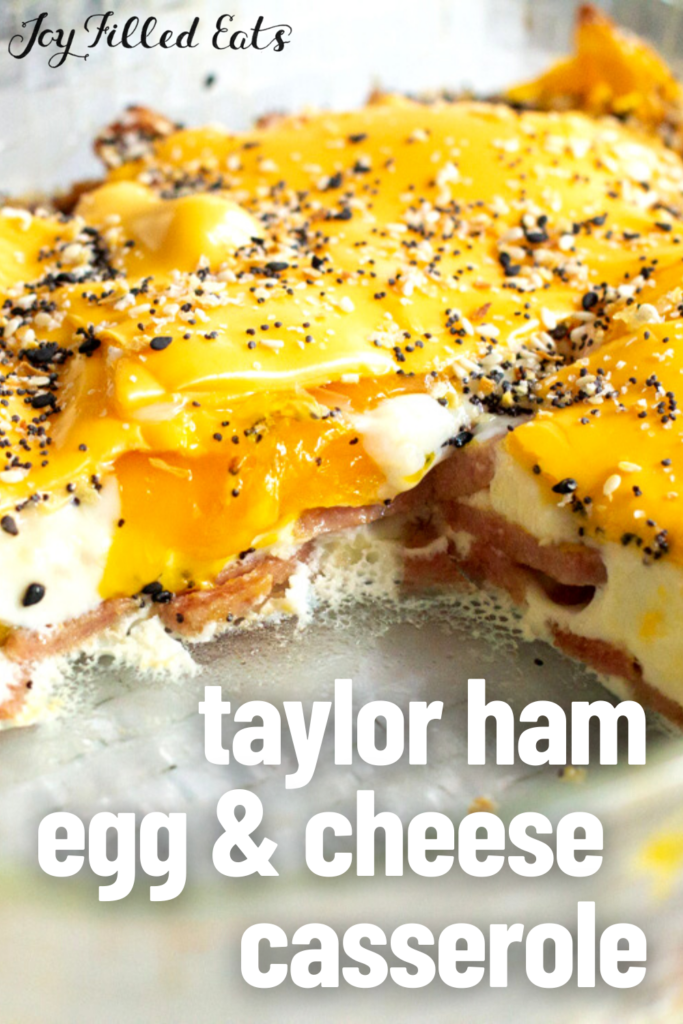 The classic flavors of a Taylor Ham Egg and Cheese on an everything bagel turned into an easy breakfast casserole that is low carb and keto-friendly. This is the flavorful breakfast or brunch egg bake you have been waiting for. 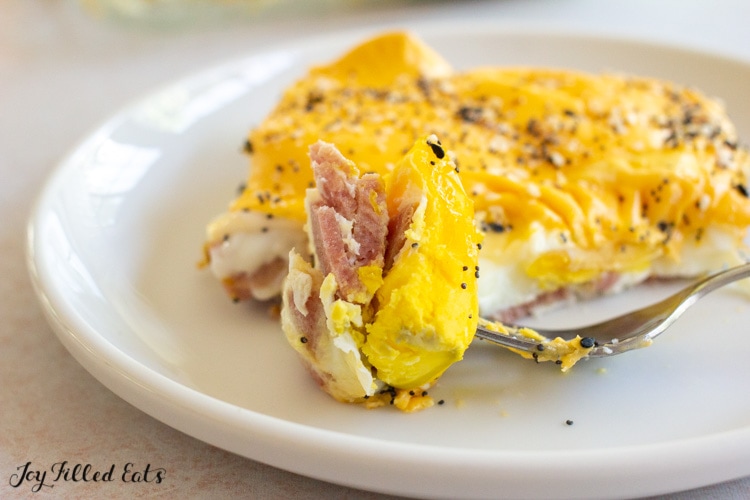 If you have ever been to New Jersey or know someone from here you have heard about either Taylor ham or pork roll. Depending on where in NJ you live factors in on your name for this delicious breakfast meat. The top half of Jersey calls it Taylor ham and the bottom half calls it pork roll. I grew up in south-central NJ and called it pork roll but after going to college and marrying my husband he converted me to the Taylor ham camp.

On our honeymoon, we were driving through Vermont on our way home and Paul tried to order his diner class "two eggs over easy, Taylor ham, homefries, and rye toast." The waitress raised her eyebrows and said "you ain't in Jersey anymore, honey". Sadly, he had to settle for bacon that day.

Whatever you call this it really is tasty. Classicly it is served on an everything bagel with eggs and American cheese. This part of the country has the best bagels. Truly. And pizza. It can be hard to stick to a low carb diet with such tempting carby options which is why I wanted to take the best flavors of those NJ bagel sandwiches and remove the bagel.

This Taylor ham egg and cheese bake was just as good and when the same is on a huge carb loaded fresh everything bagel. 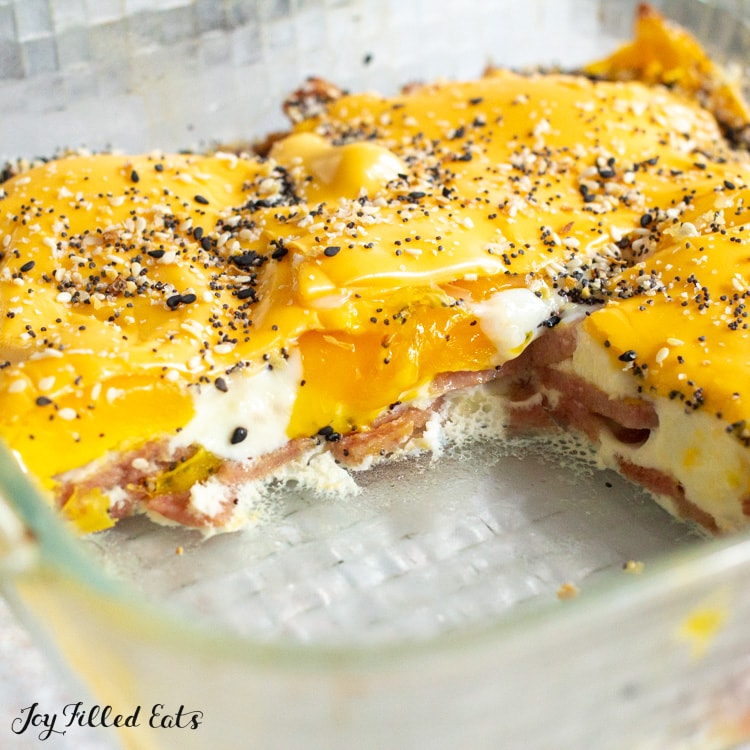 My way, yes. It is low carb and keto friendly. If you are having it on a big ole bagel that is debatable.

How to Make Taylor Ham Egg and Cheese

Step One: Add the pieces of pork roll to an 8x8 baking dish. Pop it in the oven at 400 for about 30 minutes until they are starting to crisp and brown.

Expert Tip: You can quicken this step by frying the Taylor ham in a frying pan for a few minutes and then adding it to the casserole dish. 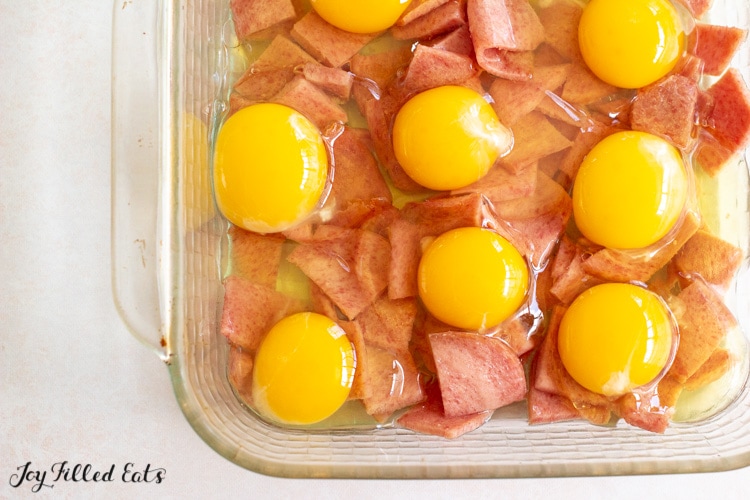 Step Two: Crack the eggs over the par-cooked Taylor ham and return the dish to the oven.

Step Three: Top with cheese and return to the oven to let it melt. You can sub in another cheese if you don't want to use American cheese. 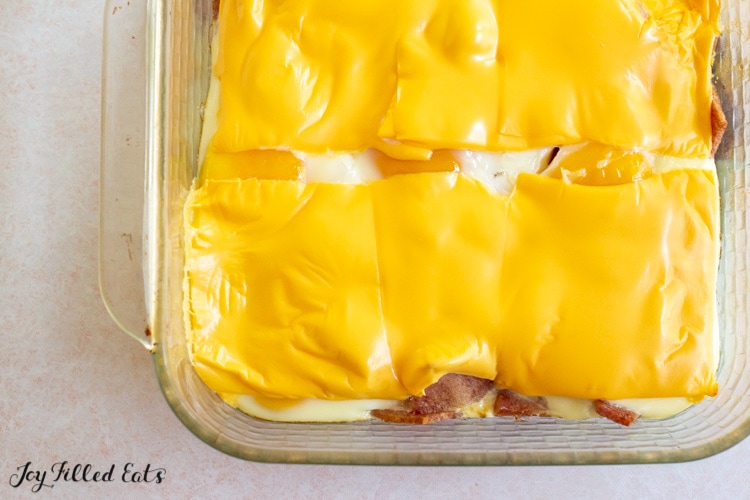 Step Four: Remove from the oven, sprinkle with everything bagel seasoning and serve hot.

How to Cook Pork Roll

Traditionally, you would cut a slit in the circle of a piece of Taylor ham and pan fry it until it is golden and beginning to get crisp. But you can also bake it in the oven. I chose to bake it in this recipe so I didn't have an extra pan to wash. It is important you cook it a bit before adding it to the casserole.

I talked about this a little in my intro but in a nutshell, they are the exact same thing. Taylor ham is a name brand. There are other brands that make the same product and just call it pork roll. Depending on which part of New Jersey you are in will vary the name it is called. 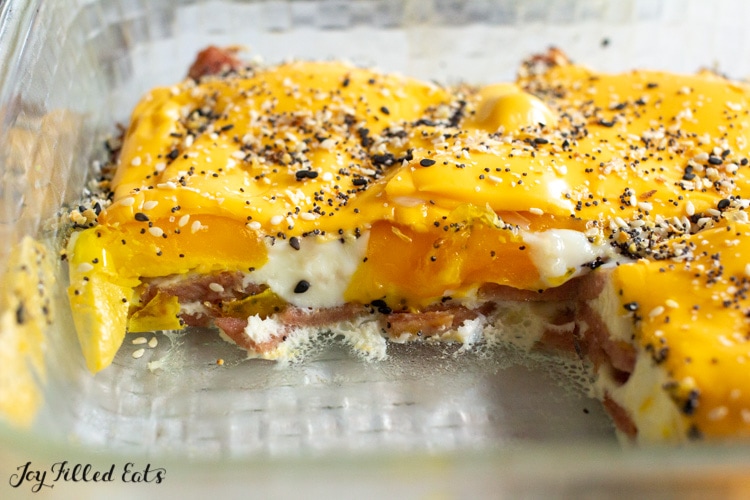 Taylor Ham or Pork Roll: This is definitely a regional specialty. If you can't get it where you live you may sub in another breakfast meat. Canadian bacon or ham are the closest subs but bacon or sausage work as well. Cheese: I do know processed American cheese is basically junk food. But it is the classic cheese in a Taylor ham, egg, and cheese, and I use it with love. You can use another cheese if you prefer.