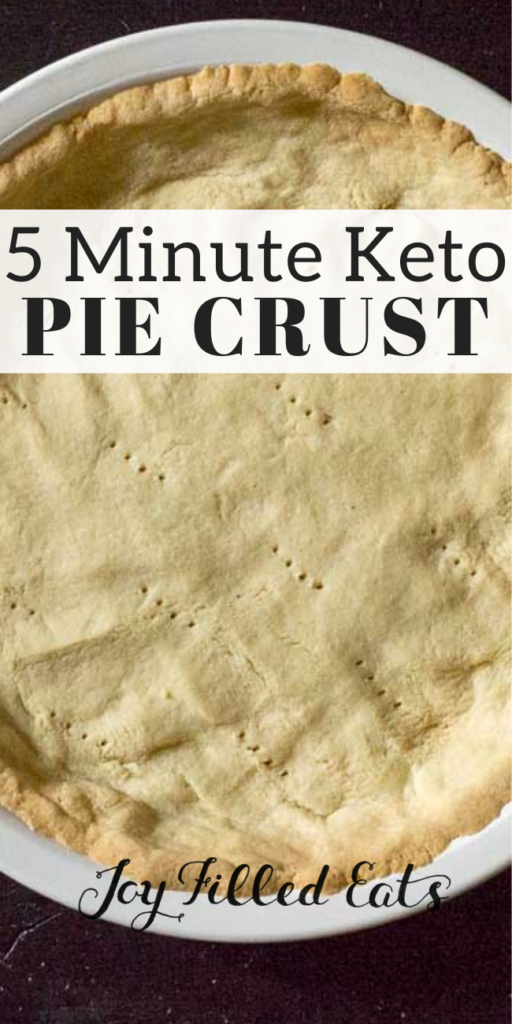 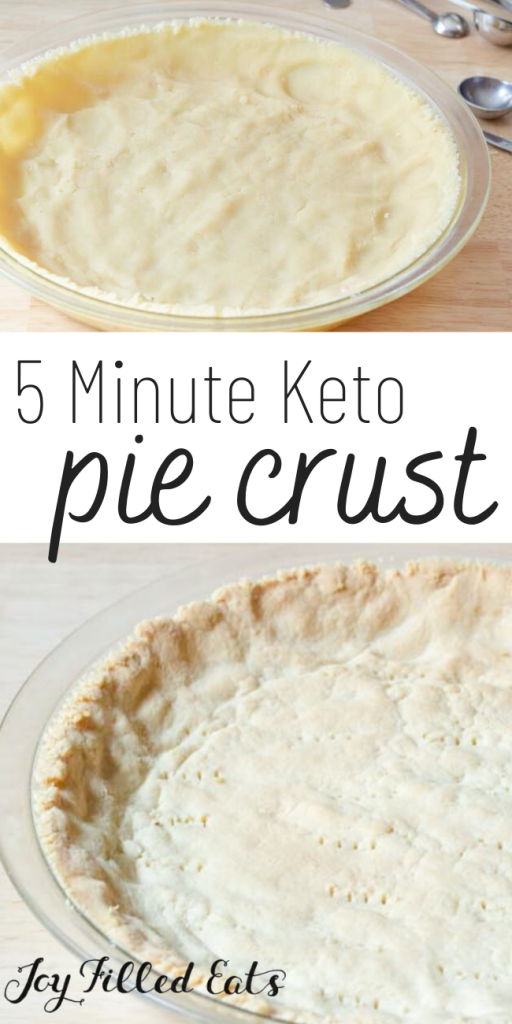 If you are looking for an easy keto pie crust recipe that can be either rolled or pressed into a pie plate you can stop right here. This low carb pie crust has only 3 ingredients, takes about 5 minutes, and works well for both and for sweet or savory recipes on a keto meal plan.

Low carb pumpkin pie, pecan pie, cheesecakes, pudding pie, custard pies, tarts, tartlets, and even empanadas come out perfectly with this as the base. 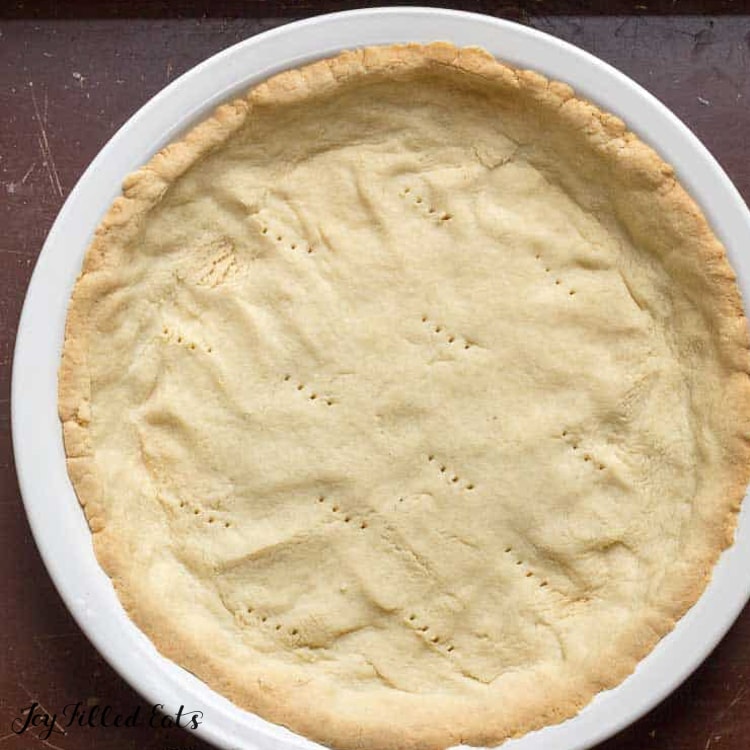 When I started blogging making a perfect almond flour pie crust recipe was at the top of my to-do list. There were so many recipes I wanted to convert that needed this base. I set out to make an easy press-in keto pie crust that was versatile. And I nailed it!

It's kind of funny that I chose a rolling pin for my blog header image since I'm not really a fan of rolling out dough. The rolling pin mentioned was my grandmother's and whenever I use it I think of her.

I do, however, prefer not to use it.

I like to press out dough with my fingers much better than having to roll it out. But the best part of this keto pie crust is you can use it with either method! And this easy crust recipe is also gluten-free, grain-free, sugar-free, and Trim Healthy Mama friendly. 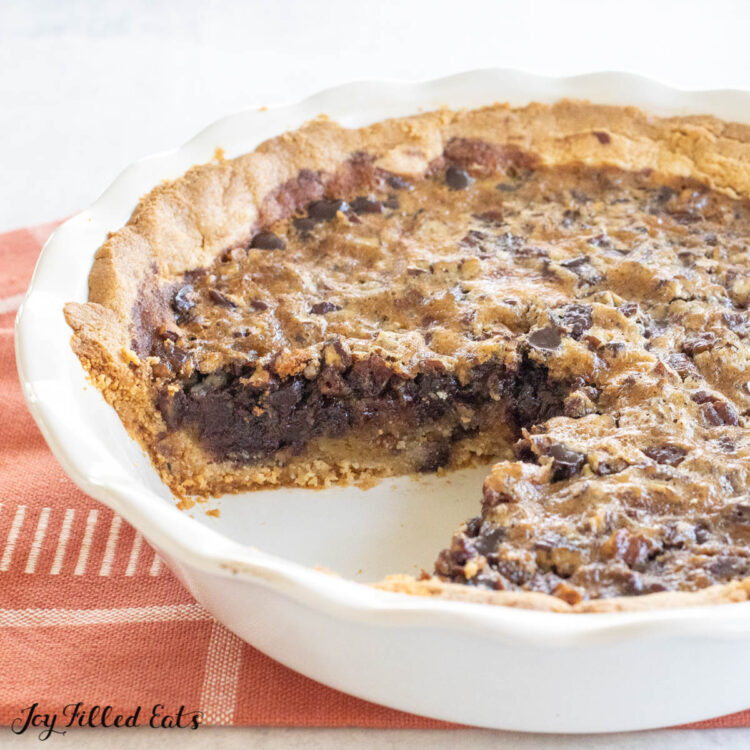 Blanched Almond Flour - I have learned to enjoy almond flour in baked goods. It has a flavor of mild depth and provides a tender crumb in cakes, cookies, biscuits, and keto pie crust.

Coconut Flour -  A little coconut flour goes a long way. Coconut flour will help to soften the nuttiness of almond flour because it's naturally drier and absorbs more moisture than nut flours.

Butter - I use the store-brand regular salted butter most of the time. I know that coconut oil can work too. I recommend using butter-flavored or refined coconut oil or ghee. If you use unsalted butter please add a pinch of salt. 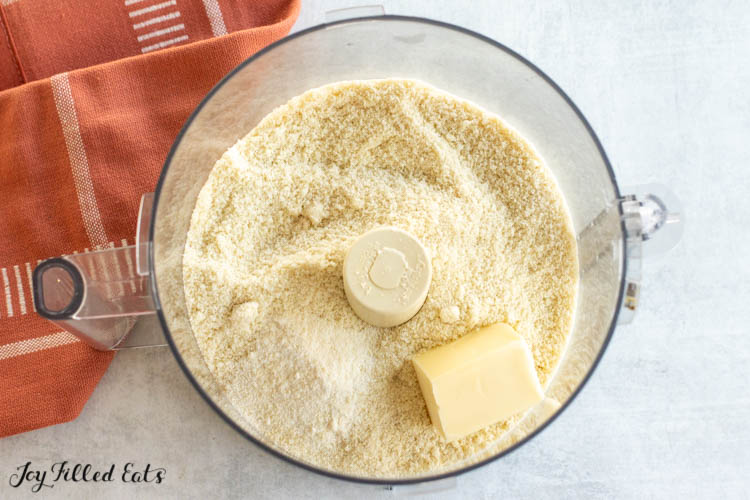 Step One: Process the ingredients in the food processor until they come together and look like wet sand. This can take 2-3 minutes on high.

The absolute most important part of making this keto pie crust is processing the dough long enough in the food processor. 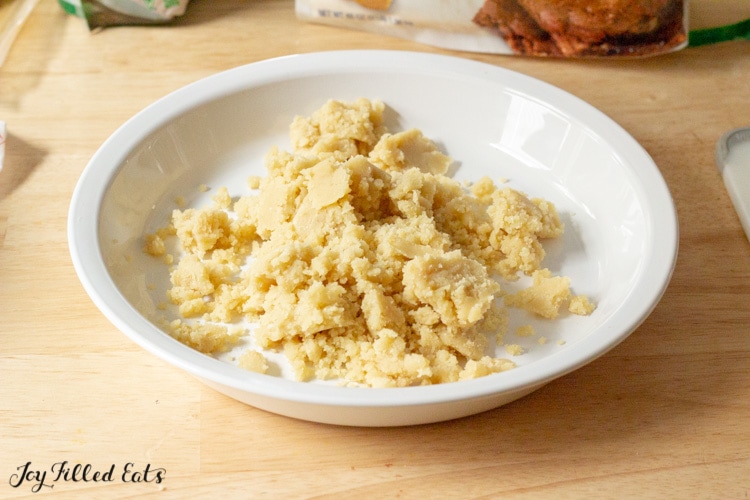 When you first start it looks like sand. After a minute or two (or three) of processing on high, it starts to come together in a ball. The food processor breaks down the almond flour further releasing the naturals oils from the almonds. This helps the pie crust dough stick together. 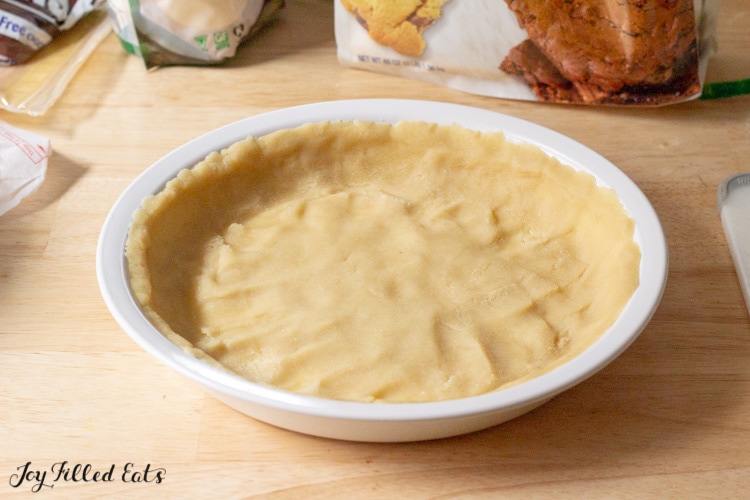 I'm going to repeat myself here. "The absolute most important part of making this low carb pie crust is processing the dough long enough in the food processor." Over the years I've had several of my readers say that the dough was too crumbly. After troubleshooting with them the same conclusion has happened every time. The keto pie crust dough needs to be processed longer. 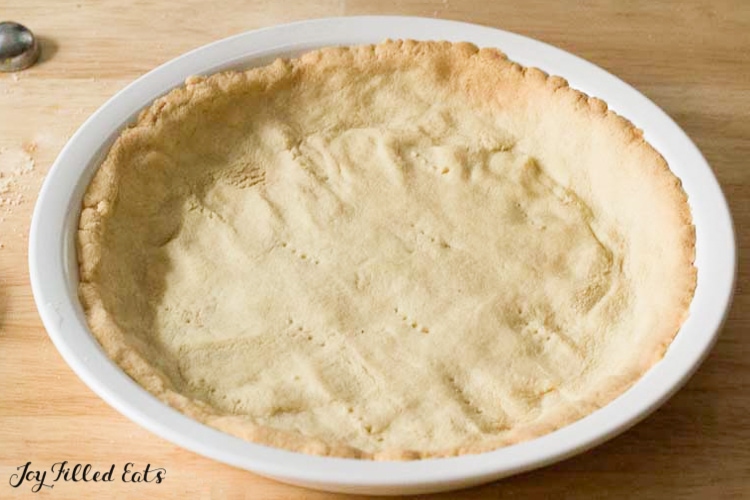 Vanilla Extract - Adding a dash of vanilla is a nice addition.

Sweetener - If you like sweet pie crust replace a tablespoon or two of the almond flour with a 1:1 sweetener such as allulose, erythritol, or xylitol.

No-Bake - If you are looking for a recipe that is no bake just click here: no-bake keto pie crust

Almond Meal - Almond meal will make the crust darker but can work in place of super fine almond flour, if needed.

Eggs - Adding eggs will make the crust chewy instead of crisp and flakey. I don't recommend adding much egg. If you want you can add a tablespoon or two of egg yolk or beaten egg.

Savory Pies - If you are planning to use this for savory recipes you can add some garlic powder, onion powder, or a spice blend. 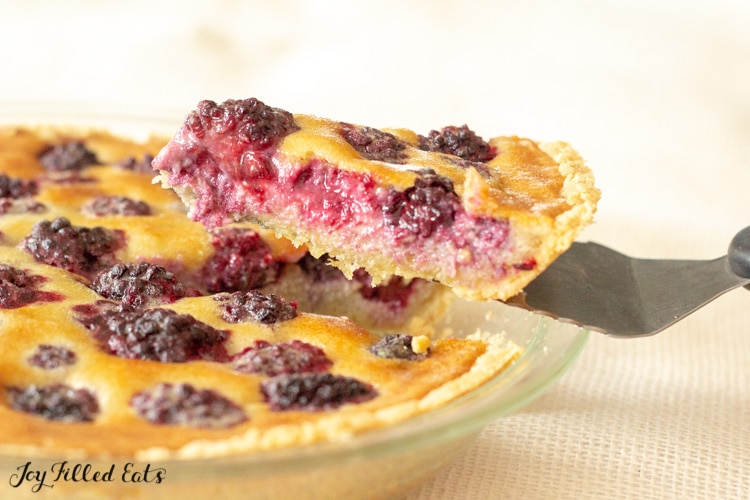 I honestly don’t think I have ever made an easier pie crust than this 3-ingredient crust. However, in case you haven’t baked a lot of pies, I wanted to point out a few things. 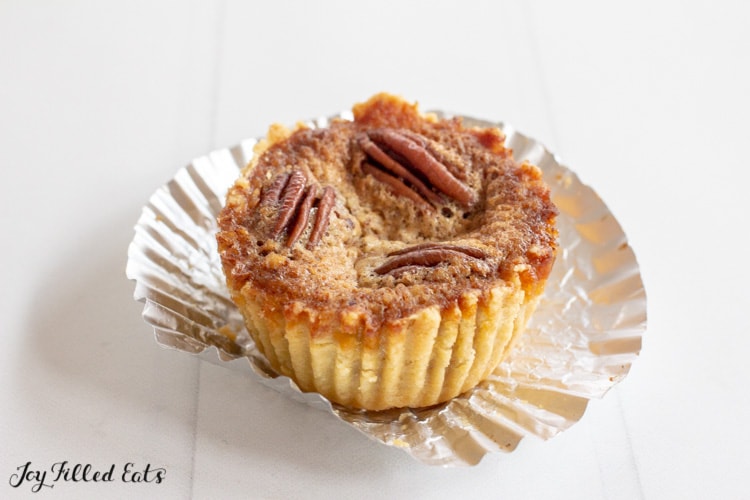 Can I Make This Ahead Of Time?

Yes, you can easily make this almond flour crust ahead of time. Just prepare it as directed. It works best if you can put the crust in a freezer-safe pie pan. This will make it much easier when it’s time to bake the crust. Those aluminum pie pans are a great option; then, you can cover them well and freeze. To make sure they are airtight, it’s a good idea to wrap them with aluminum foil and then place them inside a large freezer bag.

To cook the frozen keto pie crust, remove it from the freezer. Then let it sit on the counter for 15-20 minutes so the pie crust can thaw out a little bit. Then go ahead and pre bake as directed and finish up by using it in your favorite pie recipe or by simply adding your favorite pie filling.

Can I Make Mini Pie Crusts?

Yes, if you are making some individual pies, this pie crust is a fantastic option. It’s super versatile and makes the best pies! Use mini pie pans, ramekins, or even a muffin tin to put the crust in. The biggest thing to look for is how quickly they bake. Because they will be so much smaller, you will find that the crust bakes faster. Start checking it at around 8 minutes instead of 12 minutes. 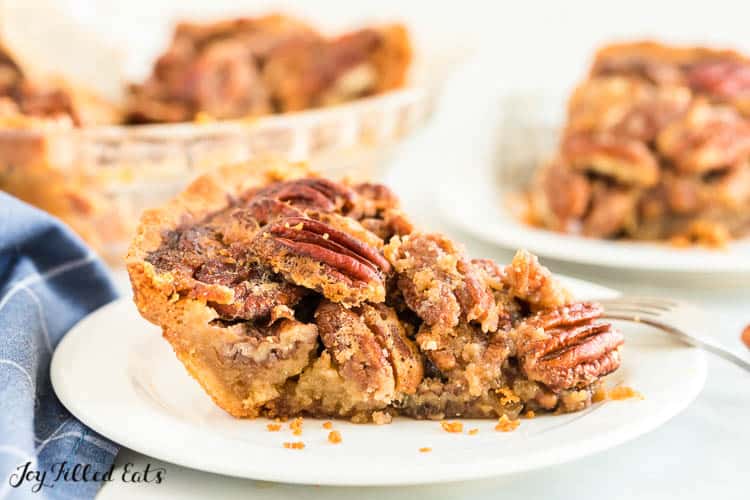 The main ingredient in the pie crust is almond flour. You will notice that there is a sweet and nutty flavor that almond flavor does have in low carb recipes. It’s not overwhelming, and you would immediately know that it’s almonds. The naturally sweet flavor is amazing when combined with sweet ingredients like fruit. However, when you add in savory ingredients, the sweetness and almond flavor doesn’t tend to stand out as much.

Ways to Use Keto Pie Crust

I first used this pie crust for my Mini Lime Tartlets. Since then I've used the same low carb crust in Blackberry Custard Pie, Pecan Pie Tarts, Keto Pecan Pie, and Fudge Brownie Pie. I've used it as both a press in and roll out pie crust and it works equally well for both.

This is enough for one regular bottom crust. I think it would work to double it to have enough for a top crust but I haven't tried it yet.

And here is the same dough used for a savory recipe. Taco Empanadas! For this one, I roll out the dough, cut circles, and then fill those, seal them, and bake them on parchment paper. 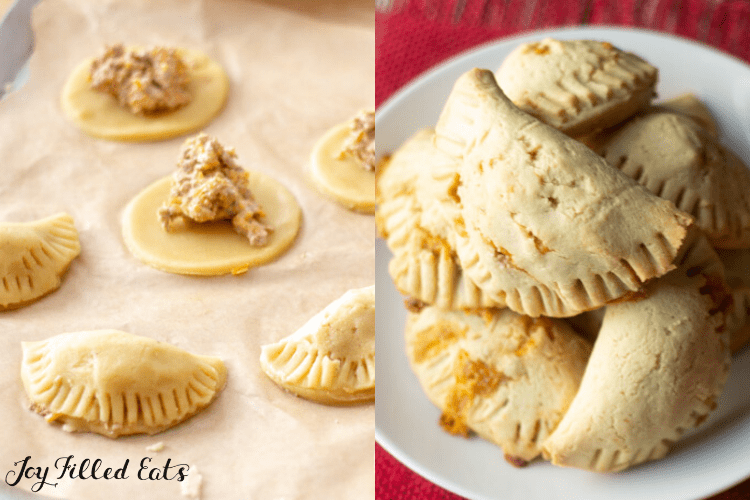 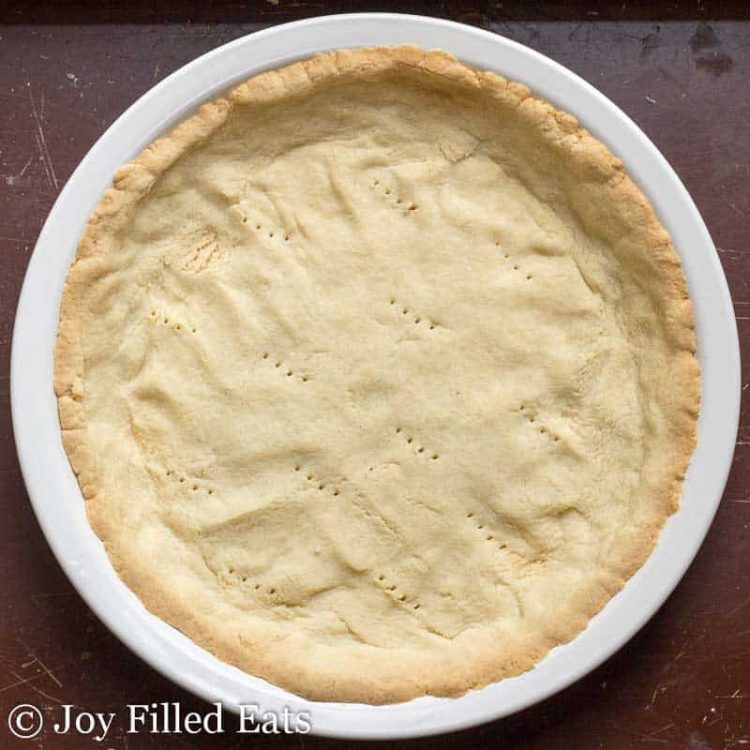 If you are looking for a pie crust that can be either rolled or pressed into a pie plate you can stop right here. This Easy Low Carb Pie Crust works for both and for sweet or savory recipes.
Print Recipe Rate Recipe
Prep Time: 5 minutes
Cook Time: 12 minutes
Total Time: 17 minutes
Course: Appetizer, Dessert, Main Course
Cuisine: American
Servings: 8
Calories: 134
Author: Taryn

Nutrition: this crust has 2 NET carbs per piece for 8 slices of pie. This does not include whatever pie fillings you use. To Store: keep the pie stored in an airtight container in the fridge. Depending on the ingredients, most of the time, the pies will last up to 4 days in the fridge.   To Freeze: put the pie crust in a freezer-safe container and make sure it’s in a sealed container. It will last up to 6 months.

This no bake crust from Mrs. Criddle's Kitchen is excellent in ice cream pies and tarts, like my Berries & Cream Ice Cream Pie.

A no bake chocolate crust from Wonderfully Made and Dearly Loved